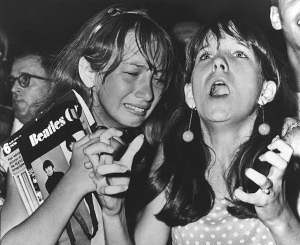 Nope, nothing sexual going on here.

One of the book’s primary contentions is that human females are as randy as males, if not more so — and it takes maximum effort and much selective vision on our society’s part to make it seem otherwise. From the book:

“And yet, despite repeated assurances that women aren’t particularly sexual creatures, in cultures around the world men have gone to extraordinary lengths to control female libido: female genital mutilation, head-to-toe chadors, medieval witch burnings, chastity belts, suffocating corsets, muttered insults about ‘insatiable’ whores, pathologizing, paternalistic medical diagnoses of nymphomania or hysteria, the debilitating scorn heaped on any female who chooses to be generous with her sexuality…all parts of a worldwide campaign to keep the supposedly low-key female libido under control. Why the electrified high-security razor-wire fence to contain a kitty-cat?”

It’s all imposed, taking away women’s sexual agency and handing it over to men. We commodify a biological behavior, turning a piece of one’s essential personhood into a kind of wealth owned by someone else. To be hoarded, traded, used to sell junk. This is absurd and outrageous, and causes all sorts of pent-up rage.

So why am I bringing this up? Because, as others have posted — and go read Nancy’s post if you haven’t — Beatlemania was largely female-driven. But the objects of all that frenzy were men. This was bad enough — everyone from William F. Buckley to Allan Sherman were threatened as hell — and the male-controlled popular culture heaped scorn on the whole thing. Especially the long hair. What was the big deal about the Beatles’ hair?

John, Paul, George and Ringo’s hair was a declaration of war on gender norms, a message in code smuggled from them to women all over the West. Though the Beatles were all heterosexual 1 men, their long hair was a sign that they did not play by the conventional American sexual/gender roles. As any devoted Mad Men viewer knows, these were no picnic for women; if Ike’s message was “no sex”, JFK’s was “a quickie by the White House pool, where you might catch something and I won’t even remember your name.”

Such a shitty deal can’t stay in place naturally; there’s gotta be real punishment for those who stray. And yet here were these four guys from England, four aliens, showing it could be different. It could be different? Sign me up! For all the pushback that the Beatles received, it would’ve been a hundred times worse if they’d been female. If four women had been spreading that message, and having that effect, they wouldn’t have been the butt of jokes; they would’ve been torn to pieces.

Beatlemania isn’t Biebermania, and you can tell by how the people in power reacted to it. Like Sinatra at the Paramount, or Presley for a time, the popularity of the Beatles was seen as a clear and present threat to male dominance, and all the male authorities, men who’d thrown their reproductive lot in with the old ways, wanted it stopped. The Beatles kicked a hole in America’s gender norms, and a generation’s worth of repressed female sexuality (and some male, too) poured through. This made Beatlemania a pop cultural event with primal energy behind it. Sure the songs were great, but there was something more going on.

Suddenly the frenzy makes sense. It was an attempt to rebalance something natural; something that had been forced out of balance for at least twenty years, or maybe twenty thousand. None of this is provable, of course — that’s not how this stuff works. But the moment I thought of it, I felt I understood Beatlemania a bit better than I had, so I wanted to pass it along. I look forward to hearing what you think.

“These Paper Bullets!”: The Fabs Meet the Bard