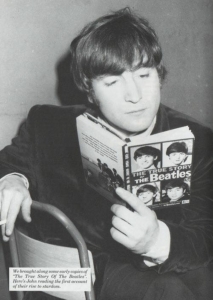 “Hmm…I did not know that”

Reader @Maya writes in to ask:

“Hi, Michael. I was wondering if you had any thoughts on the cancelation of Peter Doggett’s book on Lennon’s Dakota Days, Prisoner of Love: Inside the Dakota with John Lennon that was meant to be released April of last year. It would have been so great to have a book on Lennon’s life in the late 70s that wasn’t marred by accusations of total unreliability, so I was very disappointed to see that it had been not just delayed, but completely canceled. It has started to legitimately frustrate me. If it was a problem with the copyright of quoting the Lennon diaries, why not just paraphrase as many other books have done? I just don’t understand how this could be set to be published and then totally disappear without explanation. I’m this close to actually emailing Peter Doggett to see if there’s ever a chance of this book reaching the public. I was just wondering, as a person with far more familiarity with both publishing and the Beatles than I, if you had any insight on this? Thank you.”

Thank you, @Maya. I do have some thoughts, or more accurately, suspicions regarding the fate of this project. After familiarizing myself with the particulars a bit (thanks to Erin Torkelson Weber and Karen Hooper’s blog, The Historian and The Beatles), I think I can make an educated guess—based upon a story from my own life.

In 2012, St. Martin’s Press contacted me via my semi-highfalutin’ agent in New York. “I loved your Barry Trotter books”—the ones that sold a million plus worldwide—“and have always wanted to work with you. There’s a project idea we have, are you interested?” Sure I was. They wanted me to do a parody of Downton Abbey, Julian Fellowes’ costume drama popular at the time and, as Kate and I were fans of the show, I readily agreed to write the parody. But before I did, I asked the $64,000 question: “Are all the higher-ups behind this book? Have you gotten a sense of what Julian Fellowes might think? Parodies often get sued—are you prepared for that?” Yes to all this, the editor said, and he and my agent began negotiating the deal, while I got down to the writing and designing of the parody. At great speed, of course, because it was July or something, and they wanted it for their fall list.

Six weeks later, I finished the project on deadline, and presented it to them for publication. I’d been showing my editor chapters as I’d written and designed them, and gotten much laughter and encouragement. All lights were green.

Until, one morning, they weren’t. Instead of paying me the agreed-upon $30,000 for a book which they’d asked me to write, and had approved of in-process—they suddenly offered me $5,000 “to put the manuscript in a drawer permanently.” All communication with me stopped; even my agent couldn’t get a straight answer as to what had happened. It was, of course, completely illegal to do what they had done, get me to write a book to order on spec with a false promise, but neither my well-respected New York agent, nor my $400/hour New York publishing lawyer would back me in a lawsuit. “Mike, I’d never be able to sell another book to them again,” said my agent; with so few publishing houses, backing me and the stink I planned to make would hinder his other clients, and spell career doom for him. And my lawyer, too, made all her money working with these companies. They both required good relations with the publishing houses, not with me, the guy who they nominally worked for.

So I Kickstarted the book, and said sayonara to book publishing for good. The contracts are terrible, there is no Union, and the structure of the business itself compromises an author’s representation. And the houses themselves—with all due respect to the many smart and ethical people who toil for them—are purest courtier culture, as bad in this regard as fashion or Hollywood. As large companies, book publishers are exquisitely sensitive to pressure; as individuals, most of them come from the best (read: most expensive) schools, and must come from significant money to be able to pursue such a poorly paid career in such an expensive city. And finally, since 1980 the book publishing business has not only really embraced the blockbuster model, they have increasingly looked to Hollywood for their ethics. And in Hollywood, fame and money rules. Star-power.

I think what happened was that some editor had a bright idea, contacted me, and got me writing. His higher-ups, such as they were paying attention at all, had no very clear idea what “a parody” would be, thinking that it was something sorta like an original, only funny. Then, when it came time to publish the manuscript—traditional literary parody, as I’d done with Barry Trotter—either someone inside the house thought Fellowes wouldn’t like it and pre-censored themselves, or Fellowes himself said he wouldn’t like it. “You publish this, and I won’t even let you bid on the Downton Abbey Calendar!”

I think something similar might’ve happened to Doggett’s book. I think someone asked him for ideas, post-You Never Give Me Your Money. He pitched the book to an editor, the editor bought it, Doggett wrote it, the project was ready for publication, and then the Estate read an advance copy and threatened a lawsuit. The publishing house, looking at sales of Doggett’s You Never Give Me Your Money, a fine and worthy book, calculated that any lawsuit—no matter how frivolous—would cost more than they were likely to make on the book. Or perhaps there is another Lennon- or Yoko-related book that they figure they’d make more money on. Or perhaps it was simply that someone high up enough in the company is friends with Yoko; bigtime publishing execs and people like the Lennons are likely to know each other, have houses near each other—New York wealth and culture is a small world. (Added later: apparently the publisher, Jawbone Press, is a London-based independent. I have little direct knowledge of UK publishing culture, save for my conversations with my UK editor. But in such cultural realms, in my experience the US and UK form one ecosystem.)

Whatever the details—and it’s unlikely that we’ll know any, because Doggett writes books for a living, and anybody in that racket has to keep certain aspects of this game to themselves (as I would, had I any interest in writing a book for a Big Six publisher ever again)—there is really only one reason a book gets pulled so close to its publication date, and that is a surprise communication from a powerful party that publication will result in legal action.

Of course the book was strongly vetted; of course all conventions (like paraphrasing) were employed; of course the copies of the Diaries were obtained legally; I’m sure there were no obvious holes. In fact, I would be highly surprised if the house did not contact the Lennon Estate the moment they considered accepting Doggett’s proposal—wouldn’t you? In no way was the project undertaken as something adversarial to a famous, generally well-thought of widow and feminist icon…who also happens to be a billionaire. That is not how book publishing—or America—works in 2022.

Did Yoko signal “go ahead” and then, after the book was completed and ready for sale, change her mind? I cannot say, but she did something similar with the Norman biography of her husband, which deeply wounded the sales profile of that book. (The authorized Lennon biography will sell better than another unauthorized one.) And there is another advantage: by waiting until the book was ready to go, the Estate inflicted maximum pain on both the house and the author, costing them maximum emotional discomfort and maximum money. This will chill the already-chilly waters for any future projects on John Lennon, save for ones done by Yoko or Sean. This is a wonderful advantage.

As depressing as this reading of events is for Beatles and Lennon fans, we must always realize that what is many people’s passion is some people’s business and a few people’s family legacy. While we might hunger for “the truth,” what we will get is what the Estate feels is its financial or emotional benefit.

The person I feel worst for is, of course, Peter Doggett, who added something of real value to Beatles literature with You Never Give Me Your Money, and would have been able to clarify so much about the last truly murky aspect of John Lennon’s story. Unlike Norman or the Sheffs, I generally trust Doggett to give us an even-handed account of what he examines, and with people like Goldman, Rosen, Seaman, and “John Green” as our main sources on the Dakota Years, Doggett’s book would’ve provided a real service. I suspect Doggett was paid to “put it in a drawer” and, for his sake, I hope it was enough money for him to feel whole—though given that the book seems to have had a distinctly personal cast to it, I suspect it took something major out of him to have the project pulled.

This, then, is the tragedy of the Estate’s behavior. By wishing to control the narrative, it is not just asserting that it owns John Lennon—which it does, in the narrow legal sense—but also what we can think of John Lennon. The most important “John Lennon,” certainly at this late date, is the man who lives on in the minds of his fans, before and after December 8, 1980. And by disallowing Doggett’s expression of that—regardless of what his book said or did not say about Yoko, Sean or anyone else—the Estate is engaging in a kind of erasure. Petty, vain, self-absorbed, and with no regard to who really should be driving the narrative today, 42 years after John’s murder—the fans who loved and love him.

Which is why I’m going to make a prediction: the moment Yoko Ono passes away—and for the sake of her son and others who love her I hope that is a long time from now—the pressure will begin to build, and someone will release a PDF of that manuscript. I don’t think Doggett will, there are probably some really Draconian penalties in whatever he was forced to sign. But an assistant, an ex-editor, a freelance copyeditor, someone. I do not think there were review copies or galleys circulating, because if there were, this would’ve happened already. But the manuscript clearly was finished, and does exist somewhere, and thus will appear sooner or later. When my wife worked for some popular TV shows, I saw the amount of effort that went into keeping scripts from leaking for the relatively short time between filming and air. To keep Prisoner of Love secret, it will have to kept secret forever, and I just don’t think that’s possible in this day and age. Even against the wishes of billionaires, even in the 1% of New York where everyone knows each other, even in the Hollywood-with-less-money courtier culture of book publishing.

Beatle Memories from Marijke Kroger of The Fool