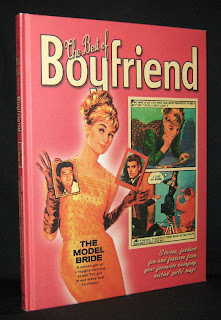 Sometimes it’s good to go through the time tunnel and remember that once the Beatles were “the strangest group to ever hit the pop scene.”

I was reminded of this when I happened across The Best of Boyfriend (ed. Melissa Hyland: Prion, 2008) in a bookstore. Boyfriend was a UK magazine for young women published from 1959 to 1966, and in addition to advice columns, clothing ads, and serial fiction, it featured stories and pictures of the latest musical groups.

In early 1963 Boyfriend ran a spread on the Beatles, who had recently released “Please Please Me.” The anonymous writer sounds almost breathless as (s)he describes the band:

“Their names are the Beatles. Their sound—although novel—isn’t exactly a revolution. But there’s something about it, a strange, compelling something. They are almost frightening-looking young men, even more modern than modern. The funny thing is that when they smile—not often—they look perfectly wholesome and nice. But the rest of the time they look wicked and dreadful and distinctly evil, in an eighteenth-century sort of way. You almost expect them to leap out of pictures and chant magic spells.”

It’s amazing how well this description fits the later image—of the Rolling Stones. They would soon be presented as the decadent alternative to the wholesome Beatles, but in 1963, the Beatles themselves appeared threatening, in a mysterious, transgressive kind of way. 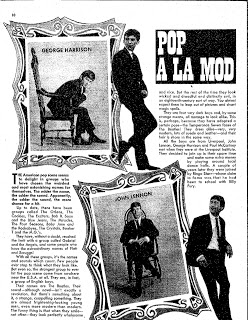 From the vantage of 2012, the photos accompanying this prose make such a reaction seem ludicrous. The besuited Beatles look rather serious (Lennon in particular), but hardly menacing. But for those of us too young to have witnessed Beatlemania (I speak as a Gen Xer), this article is a window into the degree to which even the early “moptop” Beatles represented rebellion.

One of the things the Beatles rebelled against was the sweet sentimentality of much popular music of the day. Not that the Beatles couldn’t enjoy such sentiment on occasion (“Till There Was You” on With the Beatles, for example), but that the songs Lennon and McCartney wrote often lifted the veil on young love and exposed the sexuality beneath.

Consider this reaction to “Love Me Do”:

“It was a love song with a difference—neither romantic nor happy. It was aggressive and fitted in remarkably well with the Beatle look. So, too, did their second release, ‘Please, Please Me.’ Obviously, the girls of England didn’t want gentle persuasion because both records have shot the Liverpool group to success.” 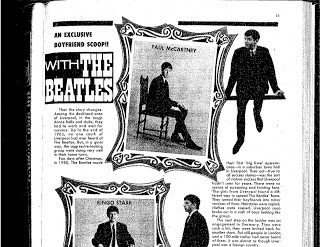 This response highlights how the early Lennon and McCartney policy of writing songs with personal pronouns in the titles helped shape the Beatles’ image. Direct address, with a suggestive demand or plea attached, was central to making the Beatles sound “aggressive” and seem “more modern than modern.”

The Stones would take to new extremes both the external props of “wickedness” and the sexual aggression “Love Me Do” and “Please Please Me” only shadow forth. But the Beatles paved the way with the cut of their clothes and songs.

Looking through the pages of Boyfriend helps put the Beatles in their complex historical context. They were one of many pop groups suitable for the pin-up treatment, part of an ever-scrolling list that includes many who have long since passed into relative obscurity (Johnny Kidd and the Pirates, the Bachelors, the Mojos, the Swinging Blue Jeans). But the richness of this period of music is also on display, as the Moody Blues, the Pretty Things, the Animals, the Hollies, the Kinks, and the Who take their turns in the spotlight.

It’s important to remember that the Beatles couldn’t have done what they did without those who preceded them. But it’s impossible to overstate how completely they kicked the door open for those who followed.

[If you’re interested in Boyfriend and the early teen magazine phenomenon, I recommend this piece by Jon Savage, which describes how these publications “created an all-inclusive, almost hermetically sealed environment of Super Pop.”]