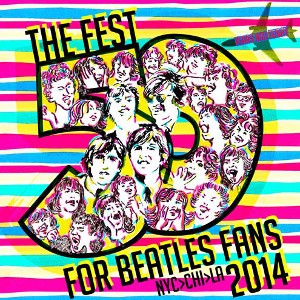 Longtime readers of Hey Dullblog know that I am just bonkers for The Fest for Beatles Fans, colloquially known as Beatlefest. The New York gathering, at Manhattan’s Grand Hyatt Hotel from Friday to Sunday, kicks off this afternoon at 5:00 PM EST. It looks pretty incredible. Dig this line-up:

Freda Kelly. She’ll never tell…or will she? Will the combined rabid interest of several thousand Beatles fans finally get her to spill some serious beans? If I ever meet Freda I will shake her hand, but since I am in LA, someone must do it for me. HD readers, I am counting on you.

Mark Lewisohn. Dammit, buy the guy a pint to make up for the US ESE debacle. He deserves it.

Tickets are no longer available online, but you can buy them at the door:

Public transport users, fear not: the Grand Hyatt is at 42nd and Lex, next to Grand Central (and down the street from The Yale Club, Mike’s old home in New York). So just get on the subway and go get your Beatle on.

To be in New York, for the 40th anniversary of Beatlef—sorry, Apple—The Fest for Beatles Fans, and the 50th anniversary of The Beatles’ appearance on Ed Sullivan…put simply, I can’t think of anything more thrilling for slightly cracked people like us. Billy J. Kramer, Chad & Jeremy, Peter of Peter and Gordon, Larry Kane, Bruce Spizer, Vivek (“The Fifth Beatle”) Tiwary…all MC’ed by Martin Lewis. If there were any more Beatle-related content packed into one venue, a wormhole might happen and we’d all slide back to 1964. That’s what I’m hoping for in October, here in LA. (I’m considering dressing up as the Chief Blue Meanie, with my cat Fifi as Max.)

We’ve got a pair of intrepid Dullblog correspondents currently casing the joint, but anybody else who’s there in NYC this weekend, please tell us what’s happening in the comments below. Who won the Battle of the Bands, and was Jimmy Nicol playing drums?

Devin after reading the preceding item