“I’ll have whatever Yoko’s having”

I hate Beatle cheese worst of all cheese. So, much to my surprise I loved CBS’ “The Night That Changed America: A Grammy Salute to the Beatles.” And perhaps my favorite part were the cutaway shots to Yoko late in the evening, which showed her doing a couple of weird, great dance moves. There was a slow swim through the seas of consciousness, a sort of arm-waving move–what else? It was thoroughly awesome, and reminded me that the only real sticking point (she’ll be relieved to know) between me and Yoko is how serious she always is. But it’s truly never too late to become a goofball. Two thumbs up, way up, for Yoko’s dancing. 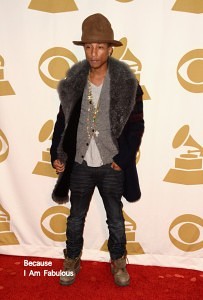 Thumbs generally down, though, on all the hats. Country guys have an excuse, they’re a bit slow—admit it, you think that too—but there are limits, Pharrell.

And who couldn’t dig Stevie Wonder’s version of “We Can Work It Out”? My Stevie-love is well-documented on this site. He’s still so good, even though he looks like five scoops of chocolate ice cream.

Annie Lennox was impressive, too—what pipes, though this video doesn’t do ’em justice. It’s like they got some intern and said, “Find the most caterwauling part of this great vocal performance.”

The duet between John Legend and Alicia Keys, who is so physically perfect she must be a Cylon. But if that’s what Cylons look like, I for one welcome our new overlords.

A few other thoughts, scribbled during the broadcast…

Can’t Please Everyone Department: watching in St. Louis, my Beatle Aunt texted, “Mad they snubbed Frampton”—Pete was always one of her favorites. I didn’t see him—was he one of the musicians, or in the audience?

Definitely Altered Department: Johnny Depp. The intro would be going fine, and then he’d slur or draw out a word in a weird way and you’d think, “Uh-oh. Is this about to turn into a meme?”

Make A Note Department: Paul and Ringo were definitely not amused by Eric Idle (or perhaps The Rutles in general). That was excruciating to watch, Idle delivering a joke, then a cutaway to an oil painting of Paul and Ringo…another joke, another oil painting…

Doppelganger Department: Is it me, or is Sean Penn turning into Dustin Hoffman?

It would’ve been lovely to hear what John and George had to say during the whole thing (assuming George would’ve done it at all). But the pinnacle of the evening, for me, was watching Paul and Ringo do “With a Little Help From My Friends.” Felt good to be alive.

Here’s what the Times had to say.