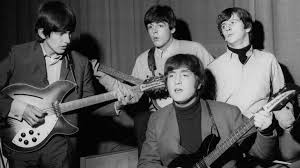 NANCY CARR * I’ve been listening to “On Air: Live at the BBC Volume 2″ pretty continuously the past few days, and it’s great fun (unsurprisingly, for anyone who’s heard volume 1). Of particular note is the astounding clarity of the sound. The warmth and immediacy of the recordings is a large part of what makes the set such a pleasure to listen to. What a superb job of mastering and transferring.

“Volume 2” has more between-song talk than “Volume 1,” which provides a fascinating window into the Beatles’ world circa 1964. And as Stuart Berman puts it in his Pitchfork review, “the grab-bag sequencing and strategically stitched between-song banter lend the collection a frenetic, cut-and-paste momentum that’s remarkably attuned to modern listening habits.”

I think Berman’s nuts to contend that “there’s a case to be made that The Beatles peaked as a band in 1964,” but this compilation is a welcome balance to the endless “Get Back” tapes showcasing the band’s infighting, that’s for sure. (I also think Berman’s “7.2” ranking for the album is rather arbitrary, but I acknowledge that it’s difficult to rank this sort of thing in purely musical terms, since so much of it is spoken word.) It’s delightful to hear all four Beatles having a good time playing live and bantering with the BBC interviewers, and for confirmed Beatles fans, it’s interesting to hear foreshadowings of things to come, both musically and in terms of the four members’ personalities. As they read the dedications to fans who’ve written in, for example, George tends towards dry amusement, John towards just-shy-of-sarcasm edge, and Paul simply sounds thrilled that so many people love them. Ringo is, reliably, Ringo.

These are a few of my favorite tracks

So far my favorite tracks include “I’ll Get You,” “Words of Love,” and “This Boy” — all powerful reminders of just how deep the Beatles’s bench was, vocally.  John and Paul are the uncontested stars, but George and Ringo also pitch in strongly. Even relatively lightweight songs like “Anna” and “Devil in her Heart” are pure joy to listen to. “Chains” is beautiful as well, and “Boys” is hilarious. The studio outtake of “I Feel Fine” features several false starts, a potent reminder of just how much effort went into building songs that sound effortless. Hey Dullblog readers who’ve been listening to Volume 2, what are your favorites?