NANCY CARR  *  In the late 60s the Beatles had three strong songwriters (and really, was that fair to other bands?), and thus three distinctive ways of treating the subjects they wrote about—landscapes, love, drugs, etc. (That’s without getting into the significant variations within each songwriter’s work). This time, I want to consider what Lennon, McCartney, and Harrison saw when they looked at landscapes. 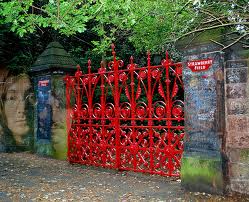 The physical Strawberry Field, in Woolton

Inspired by the grounds of the Strawberry Field children’s home in Woolton, this song proved so powerful that Lennon’s memorial in New York City’s Central Park bears the same name. That transposition works because the landscape of “Strawberry Fields” is almost wholly internal; listening to the song, you get none of the physical details of the actual place. “Strawberry Fields” is defined as a state outside the time and space grid, where “nothing is real.” There is a tree in the song, but it’s an absolutely metaphysical tree. When Lennon says “No one I think is in my tree,” it’s obviously a mental and emotional perch he’s talking about. Strawberry Fields can last “forever” because, as an internal state, it’s impervious to time and wear; there’s “nothing to get hung about.” Lennon’s dreamy vocal delivery, the paradoxical lyrics (“I think I know I mean a yes / But it’s all wrong / That is I think I disagree”), and the swooning melody combine to site Strawberry Fields firmly in Lennon’s mind. Being invited to join Lennon in Strawberry Fields (“Let me take you down”) feels like a privileged intimacy. 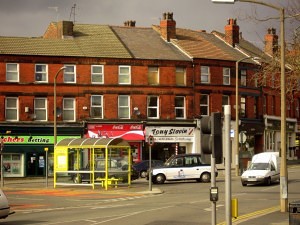 McCartney’s song about childhood in Liverpool couldn’t be more different from “Strawberry Fields,” even though the two songs appeared on the same 45. Where Lennon’s foray into psychedelia produces a hazy, private interior landscape, McCartney’s produces a hyperrealistic setting populated by vivid characters in motion. And McCartney sounds deliriously happy that “Penny Lane is in my ears and in my eyes.” In “Penny Lane” we get enough details to visualize both the setting (“behind the roundabout,” “in the barber’s,” etc.) and the people (the banker, the pretty nurse, the fireman, etc.). The repetition of “Meanwhile back . . .” increases the scope of the action—so much is happening simultaneously that it’s a challenge to narrate. The ringing brass in the song is a wake up call, the sonic opposite of the lulling melody of “Strawberry Fields.” Lennon’s song offers an escape from concrete realities into a dreamscape; McCartney’s song is in love with the tangibility of the world, with everything that can be seen with the eyes and heard with the ears. Above all else, the song is in love with the populated landscape, with all the quirks, actions, and hidden moments that be glimpsed (the nurse who “feels as if she’s in a play”). 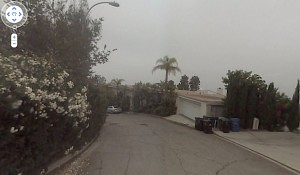 The house on Blue Jay Way where Harrison stayed

It’s telling that Harrison’s landscape song is about a street rather than a house, about a journey rather than an arrival. Harrison does offer details that establish the song’s physical setting (“There’s a fog upon L.A.”), but the fog is at least as metaphysical as Lennon’s tree. The dark, spooky music and treated vocals make the friends who have “lost their way” seem in peril of more than just being late enough to find that Harrison is asleep when they arrive. When Harrison sings “We’ll be over soon they said / Now they’ve lost themselves instead,” it’s not merely the route his friends can’t find, but their very selves. Where Lennon creates an internal landscape that stands alone, Harrison maps an internal journey onto a physical one. You may think you’re just trying to find someone’s house, but you’re actually on a spiritual quest.

Beatles landscapes: inside, outside, upside down

Reflecting on these three songs, it’s clear that one of the Beatles’ strengths was the band’s ability to bring the visions of its different songwriters to musical life. This ability would break down, and was never free of tension, but it’s worth pausing to appreciate that it did work so well for a time. That Lennon’s paean to the the inner world, McCartney’s pixilated love affair with suburban street life, and Harrison’s brooding exploration of the mirrored relationship between the inner and outer world were all released within the same year is also remarkable. The Beatles combined productivity with quality control like nobody else before or since.