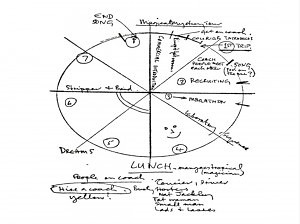 This blog seemed to go through a phase where every second post was about how awesome Ram was/is. Go back and check the stream; it was amazing. Went on for months. And I support that, not just because Ram is awesome, but because this ol’ world of ours is big enough to have one place where Ram-love flows freely, without fear.

In that same spirit of being just bleeeaaagggrhhh…without in any way demeaning the White Album!—I present the following.

This evening while trying to avoid doing my wife’s Bialetti pot, I read this Slate review of the documentary “Magical Mystery Tour Revisited” (posted on Dullblog here), and bashed out a comment. Upon my usual obsessive re-reading and editing, this screed seemed too ur-Dullblog to waste on Slate. Slate‘s motto should be, “Our commenters hate everything. Slate, its editors, this article, but most of all, each other.” Slate isn’t a magazine, it’s a cyber-thunderdome for the underemployed. Not that I’m judging. I aspire to mere under–employment.

A flop, or the first “Midnight Movie”?

“Forrest Wickman seems weirdly hedgy in this review of Magical Mystery Tour Revisited, as if he’s reviewing something he doesn’t really want to talk about, or doesn’t want to admit how much he doesn’t like it. Maybe he’s a Gen Y-er with a low tolerance for what he thinks might be hippie bullshit; that would make sense. “This movie sucks. But then again, it is The Beatles, and Scorsese likes it, so here’s a review of this documentary.”

I’ve watched the doc, and IMHO it’s solidly worthwhile. True, MMT the film isn’t very accessible, but there are reasons for that, and they are interesting. (Well, interesting enough for a piece on the internet. You’ve been warned.)

Magical Mystery Tour marks the first time since the 1962 Decca Auditions that The Beatles weren’t surrounded by any of the topflight collaborators that helped shape their output. On the music side, they had George Martin, who we can all agree was a perfect fit (just listen to what Dave Dexter Jr. did to the early US records if you need convincing). On the non-musical side, The Beatles’ standard MO was for Brian Epstein to hire a young, hip, yet established talent like Dick Lester (AHDN and Help!),  Alan Owun (AHDN), Joe Orton (aborted), Peter Blake (Sgt. Pepper), Richard Fraser (ditto) or Heinz Edelmann (Yellow Submarine) to ensure that all Beatles product maintained a high level of competency and professional gloss. This then allowed The Beatles to concentrate on the music, the music to shine through, and their personal charisma to take hold…with the downside being (as in Help!) a sense that John, Paul, George and Ringo didn’t have much to do with it. (Lennon was particularly acid about this later, but he seemed to forget that the alternative to Help! was Having a Wild Weekend. Just as he forgot that the alternative to “having to put on fucking suits” was “getting a job.”)

Whenever Beatle product wasn’t under Epstein’s eye, icky things happened, even to the music, which one might think would be impervious. Compare the UK LPs with the American ones: major or minor, the UK ones are stylishly packaged and sensibly sequenced, whereas the Capitol cash-grabs like Something New or Beatles VI or Beatles ’65 or Yesterday and Today somehow reduce the greatest group in rock history to Liverpool’s version of Herman’s Hermits. Brian’s eye for the right collaborators was a huge part of the group’s success, and how the five of them leveraged that success into more and more control, is the breakthrough that allowed the entire second half of their story. And also, what drove the group apart.

MMT was the first departure from the successful method, but it was largely an unwilling one. Though Brian died in August of 1967, The Beatles were already so established that control was no longer a question—the BBC approved Magical Mystery Tour sight unseen, just as Abbey Road now let them record past 10pm and EMI spent “princely” sums on their sleeves. But the group didn’t just jump to a bigger-and-better manager, like Robert Stigwood; they went DIY. That’s huge in 1967. It is, dare I say, punk, if in the most Beatle-y of ways.

That’s the good news. The bad news (for The Beatles, at least) is how MMT really cemented Paul’s dominance of the group’s direction. Though they were nominally managing themselves, Paul’s desire and ability to handle the details made him the group’s creative driver, precisely when that title meant more than ever. Because they no longer had an external enemy to defeat—because The Beatles could truly do whatever they wanted—each member began moving in his own direction. Brian’s death and Paul’s ascension are two sides of the same tragic, inevitable coin. Sgt. Pepper‘s creative unity is so strong it doesn’t even have to have a concept to become a concept album; MMT‘s creative disunity is so strong that even some of The Beatles’ best songs can’t stitch it together. The strengths and flaws of MMT are the strengths and flaws of the post-Brian Beatles, and for that alone, the film and documentary are must viewing for fans of the group.

Like their soon-to-be launched record label Apple, MMT is The Beatles making it up as they go along and, like Apple, it’s authentic and revealing even when it’s half-assed. Also: There is a side of The Beatles which is essentially comedic, and you see that clearly in MMT. And of course one can (and should) look at MMT within the context of the experimental art/filmmaking that McCartney especially was hoovering up. Wickman’s on the wrong track when he compares MMT to Head—Magical Mystery Tour is not ironic, cynical, detached; it’s not about the alienation of being famous or the distortions of media; it’s not The Beatles through the lens of Nicholson or Rafaelson or anybody but their own weird, switched-on, music hall, Goon-y, ration-raised, English selves. MMT‘s a home movie, and worthwhile (or not) for the same reasons. To compare it to a young Hollywood film is to miss the point entirely.

Nor was it a “head” movie like 2001—though it probably should’ve been. The movie was only a failure because it was broadcast to the wrong audience under the wrong circumstances. If it had, for example, been released via exclusive showings at the very-much-alive Brian Epstein’s Savoy Theater, and then shown in America at the Fillmore East and West, we’d look at it totally differently. Not The Beatles’ first flop, but the world’s first midnight movie. If Brian had lived, I suspect the final product would’ve either been more polished, or psychedelically dog-eared, but released in the right way to the right crowd.

Then there’s the music, which spans what is arguably The Beatles’ most interesting, most creative, most cohesive year (Nov. ’66 to Nov. ’67). So MMT‘s an essential part of The Beatles’ story, and anybody with more than a passing interest in the group should give it a try. No, it’s not “A Hard Day’s Night,” which is precisely what makes it so fascinating.”

Whew, glad I got that off my chest. Meanwhile, here’s some newly released MMT outtakes from the vaults of Auntie Beeb.