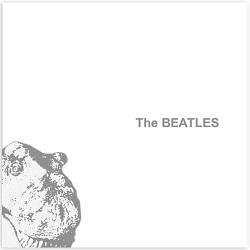 This past Friday Tributosaurus did the entire White Album live (well, with one exception, to be explained in a bit) — and what a show! Say what you will about this being the “tension album,” or about editing it down to one disc, a la George Martin’s recommendation (and we have on this blog, oh we have), but this is an amazing set of songs.

A few observations about the show:

Finally, “Revolution 9” was the biggest buzzkill I have ever experienced at a live show. The band pointed out that the song is an example of musique concrete and thus can’t really be recreated, so they played the recording. Makes sense, but man how the energy drained from the room (along with phalanxes of people heading for the restrooms). It’s striking that this is the one song in the Beatles catalog that can defeat a live performance. I have to confess that I’ve never liked it (though I have, intermittently, felt that I should respect it) and this experience helped me understand my antipathy.