The Beatles without earmuffs 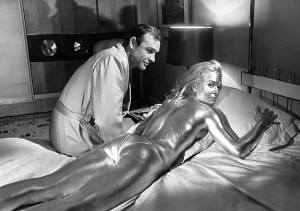 Does anyone else find this photo reeeally creepy?

This past week, I’ve been watching the early James Bond movies obsessively, as research for a new novel. Personally, I prefer From Russia With Love over Goldfinger for two reasons:
1) I prefer gritty Cold War spycraft over glitz and gadgets; and
2) Bond takes a completely gratuitous swipe at the Fabs in the first section of Goldfinger, right before he gets karate chopped and Jill Masterson gets gilded. (“Skin suffocation” is debunked here.)

The video’s weird, sorry; the Beatles quip comes at about :30. The rest is a bizarre mini-cut of Goldfinger’s most sexist moments.

Now as we all know, The Beatles won this war, as enumerated in this blog post. But besides William F. Buckley’s lockjawed mewlings, what are some other egg-on-face Beatle-takedowns from the pop culture of the 60s and 70s? Put ’em in the comments.

PS—Connery was just a mouthpiece for the screenwriter, as this hilarious Shatnerian video proves. I dare you to listen all the way to the end.