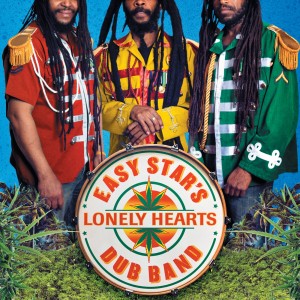 Thanks to all who’ve shared favorite covers on Ed’s and my posts! Here’s another category: covers of an entire album. Not counting compilations of tracks from various artists or purely instrumental renditions, Sgt. Pepper’s alone has been covered at least three times that I know of: by Cheap Trick (live), by Big Daddy, and by the Easy Star All-Stars. Cheap Trick’s covers are pretty straight-up versions of the originals, but the Easy Star All-Stars and Big Daddy ring interesting changes on them.

The Easy Star All-Stars prove that reggae can work well as a style in which to cover the Beatles, and they consistently sound like they’re having a lot of fun with it:

Big Daddy is a group that does oldies-style covers of later songs (for example, their 1985 album Meanwhile, Back in the States included 50’s-sounding covers of “Jump,” “The Safety Dance,” and “Billie Jean,” among others). Predictably, the degree to which this is enlightening or amusing varies, but their version of Sgt. Pepper’s is fascinating, to me at least, because in it Big Daddy goes back to the roots of the styles the Beatles employed on the album. Doo-wop,  Dion-style emoting, and the instrumentation from songs like “Palisades Park” and “Peggy Sue” can all be found here. It’s a consistently interesting Historical Mystery Tour. Here’s their doo-wop version of “Good Morning, Good Morning”:

What other full albums of Beatles covers do folks recommend?