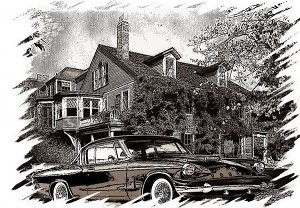 Anagrams, an alternate-history novel in which a Baby Boomer returning to 1962 not only meets the Beatles but changes their trajectory, has just been published by first-time book author Alan Bryson. The novel’s hero, Nathan Bellew, must decide when and how to intervene in events he knows are set to unfold, while coping with the issues that come with being, outwardly, an 11-year-old kid again.

Bryson is an American-born music journalist based in Europe: you can read his work at AllAboutJazz and listen to his interviews at Talking2Musicians. He graciously sent Hey Dullblog a copy of his ebook, which you can sample or purchase here. As is our usual practice, we responded by pelting him with queries. — Nancy Carr

Where did the idea for Anagrams come from? What inspired you to write it?

About seven years ago I started doing interviews with musicians, and learned that speaking with your musical heroes can be kind of unnerving. Luckily, I discovered that on some level we are all fans of someone. It turns out that once the topic is about a common musical hero, then interviews tend to become two fans talking about something they love.  I’ve learned that time travel is a universal daydream for music lovers, and I’ve asked plenty of musicians the “if you could go back in time” question. So that played a big part in coming up with the idea for Anagrams.

One interview that might interest Hey Dullblog readers was with John Scofield, the great jazz fusion guitarist. I once mentioned to him how much I enjoyed it when he sat in with the Allman Brothers Band at the Beacon Theater, and that led to a chance to interview him. Usually I would spend a couple of weeks getting ready for an interview, but he happened to have an opening in his schedule so I couldn’t prepare. Well, because he is a fellow baby boomer, I asked him about the Beatles on the Ed Sullivan show. He described the excitement of sitting in front of the television as a 13-year-old with his guitar on his lap, surrounded by his family as they all watched the Beatles. From there he talked about the amazing high school in Connecticut he attended that had bands like Cream, the Young Rascals, and Sly and the Family Stone play in their auditorium. So the musical past is a place where I’ve spent some time, and I’ve even had the chance to talk to musicians who’ve played with John, Paul and George.

Also, some of my favorite movies from the 1980s were about going back in time. “Back to the Future” and “Peggy Sue Got Married” certainly inspired me. I was influenced as well by way the plot of “Groundhog Day,” which gave Bill Murray’s character a series of do-overs.

What about the novel do you think will be especially interesting to Beatles fans? 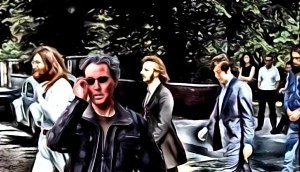 The author takes a call, while some pedestrians cross the street

The main character, Nathan Ballew, has a brush with death in 2013 and suddenly finds himself back in the summer of 1962. There is, however, one big catch. He’s only eleven years old. It’s fun to really think through what you would do in that situation.

As bad as things might be right now, we did avoid nuclear war with the Soviet Union, and that fact wasn’t lost on Nathan. Because of the potential for unintended consequences, he decides to focus instead on music and promoting “peace, love, and understanding” in the process. No need to spoil the plot for Beatle fans, but who among us, given how much we know about the Fab Four, could resist getting close to that magic?

In “Back to the Future” we believed that teenage Marty McFly was best buds with a nuclear scientist who was buying plutonium from terrorists. By those standards the Anagrams story is absolutely plausible, since it only asks the reader to accept the reverse of Murphy’s law. If something can go right, it will, and at the best possible time. If you can suspend disbelief for a few hours, then the past can come alive again in a fresh and exciting way. At least that was my goal.

Which characters did you find especially interesting or challenging to write about? I’m thinking especially of the famous people in the novel — the ones readers would know about from other contexts.

I tried to imagine this story as a film driven by events and situations. It unfolds primarily from Nathan’s perspective, and I tried not to put too many of my words in famous people’s mouths. So I wrote about their actions instead, and left it up to the reader to imagine what is going on in their minds.

Did the novel take any turns that surprised you?

What surprised me was how intense the experience was. Over the years I had thought about this subject, but actually writing it made it truly come alive. In the book Nathan is often surprised by things “falling into place.” The story itself surprised me in that way, because it was uncanny how fortuitously events unfolded. Someone unfamiliar with the history might think that was fiction, but the cascade of real events was an amazing surprise for me.

I wasn’t sure about the ending until I wrote it. There were several ways it could have gone, but on that final day I went with what I felt was right as I put my hands on the keyboard.

How did it feel to spend this time and effort re-imagining the 1960s? How did your feelings about the era change or deepen as a result of writing the book?

The thing that struck me about the 1960s was the optimism.  A lot of us truly believed we could change the world. The Beatles were a symbol of that optimism, and a peaceful challenge to the prevailing authority. To me the break up of the Beatles at the end of the decade was somewhat symbolic of the death of our collective dream.

There’s no denying that the mind-expanding use of psychedelics drugs played a part in the collective spirit of the times. Looking back, it was another sign of the end when that trippy counterculture was gradually replaced by hardcore drug abuse. George Harrison fans will no doubt remember how his initial positive expectations about San Francisco’s hippie culture were dispelled by what he saw there.

However, it was also an extremely divisive time. We were being sent off to Viet Nam, there were violent clashes with police and the National Guard, and there were the assassinations of the Kennedy brothers and Martin Luther King, Jr. While writing Anagrams I realized how difficult it would have been to stay neutral during those times. There were a lot of people back then who weren’t pleased when John Lennon sang “But when you talk about destruction / Don’t you know that you can count me out?” It wasn’t all peace and love back then.

Maybe every generation feels this way, but personally I still can’t imagine a better time to have been young than during the 1960s. Despite the downsides, and there were significant downsides, it was a magical time to be young, and that feeling did deepen as I relived that time while writing Anagrams.

Which Beatles songs (or albums) do you especially love, and why?

Here I have to cop out. I was 13 when I bought my first Beatles album, and 19 when they released their final album. Thus they were the soundtrack to my entire teenage years. As I matured, they evolved musically. For me their music is forever fused with my memories of those years. Even songs which wouldn’t ordinarily be on many lists evoke powerful memories. I remember walking into a party and “Everybody’s Got Something to Hide Except Me and My Monkey” was blasting on this great stereo and people were really dancing to it. It was simply magical, but I could understand someone who might have only heard it on an iPod shaking his or her head in disbelief at that. Another song people wouldn’t suspect as a favorite is  “You Can’t Do That.” That was playing the first time I worked up the nerve to ask a girl to dance. I’ll stop, because I could go on like this for a long time!