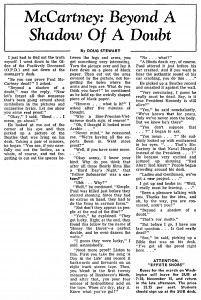 “We’ve never seen the body.
But we know he’s there.”

DEVIN McKINNEY  •  Having written about the McCartney death rumor in Magic Circles, I knew that campus papers in the Middle West and Near East were the seedbed of the whole thing. For several weeks in the autumn of 1969, student editors, reviewers, lit majors, and budding gag-writers scrambled to co-opt, rip off, outdo, or otherwise find their place on the bandwagon begun by University of Michigan student Fred LaBour’s seminal satire-dissertation, “McCartney Dead? New Evidence Brought to Light,” printed in the Michigan Daily of October 14.

Lately I’ve been researching Gettysburg College, the institution that employs me, with emphasis on the years 1967 to 1972, and part of that research has involved combing back issues of our student rag, The Gettysburgian. Since the apex of that timespan is also the moment when Paul Is Dead was a hot topic on the American campus, I wondered idly, now and again, but without doing any concerted searching, if any PID references had shown up in our own paper. By happy accident, I came a week or two ago across this humorous take by Gettysburg student Doug Stewart. (Click to enlarge.) Printed on November 7, 1969, it adds another page to the scrapbook of a mythology I’ve always found both richly significant and completely goofy.

Speaking of the latter: Also found in the archives was this photograph from the 1970 edition of The Spectrum, the Gettysburg College yearbook, showing the members of the Sigma Nu fraternity rendered, in primitive PhotoShop, as Sgt. Pepper’s Lonely Hearts Club Band. 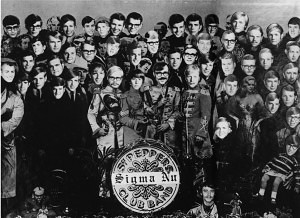