NANCY CARR • My favorite moment of Paul McCartney’s October 13 show in Dallas was a visual grace note. At the end of a song, as a stagehand came forward to take McCartney’s Hofner bass and give him a guitar, McCartney held the vintage instrument up and balanced it one-handed, headstock down, body up. He looked at it, and the audience, teasingly, as if he might really let it fall. Seeing him let that elegantly long-necked bass—the same one he was playing 50 years ago in A Hard Day’s Night—sway in the air was an astonishment. After a breathless second, the Hofner tilted toward the stagehand who (of course) caught it handily. 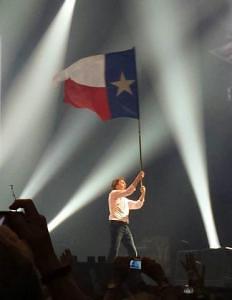 The most surreal sight of the evening for me, born and raised in Texas.

That balancing act seems to me the appropriate image for McCartney the performer today: he’s playfully deploying his old tricks, and getting a kick out of the audience’s response.

The Dallas setlist stayed close to what he’s been doing throughout the tour: a lot of Beatles songs, particularly those the band never played live (“Lovely Rita,” “Eleanor Rigby,” “Back in the U.S.S.R,”); Wings hits (“Listen to What the Man Said,” “Live and Let Die,” “Hi, Hi, Hi”); older solo songs (“Maybe I’m Amazed,” “Another Day”) and songs from “New” (“Save Us,” “Queenie Eye,” “New”). He also framed his Lennon and Harrison tributes (“Here Today” and “Something”) in the same way, and used some of the same jokes I’d heard earlier this tour in San Francisco. But he brings a force and conviction to each show that override the sameness; it never feels as if he’s coasting. As one review of the Dallas concert put it, for McCartney “every gig is an audition.”

And every gig is a risk: at 72, can he pull off a show that will match or top what the audience expects? With such a heavy musical legacy to carry, can he avoid sagging beneath it? 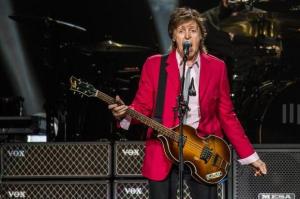 Not afraid to sing “Helter Skelter” at the end of a long show, not afraid to wear a pink shirt with a red jacket.

McCartney answered that definitively during the second encore, when he sang “Yesterday” and “Helter Skelter” back to back (they were the 35th and 36th songs of the show). “Yesterday” was obligatory, but “Helter Skelter” was revelatory, as McCartney tore into the song with the energy of a man decades younger. Yes, his range of styles and subjects can still astonish. Yes, he can perform for two and a half hours without a break, without an opening act, without a net. Yes, he can still look wickedly gleeful when the fireworks go off during “Live and Let Die.” Yes, performing live is still clearly his element, and lately he seems happier than ever to be playing for spectators.

What comes across the stage most strongly at McCartney’s recent shows is his sheer joy in the music and the crowd’s response to it. The second encore ended with “The Love You Make,” and, taking his final bows, McCartney was visibly basking in the joy he was receiving from the audience in return. He seemed more lit up by it than by the spotlights.