Maybe all of you knew this already (and if so, I appreciate you allowing me to live in blissful ignorance). This morning commenter Linda S. hepped me to an interesting development in Beatledom: Apple has engaged comic book artist Alex Ross to create photorealistic illustrations based on the Beatles’ 1968 film, Yellow Submarine.

The thing about Blue Meanies is, they never look like Blue Meanies. In the real world, they wear suits — which was the Beatles’ first lesson post-Yellow Submarine. 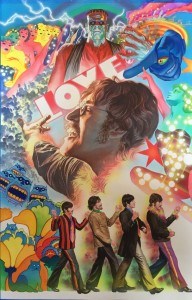 Hey, kids! See if you can find the sugarcube hidden in this photorealistic art!

Yellow Submarine by Alex Ross? What’s next? The Beatles cartoon by Frank Miller?

Rebooting is the current Holy Grail of corporate media. I’m sure that within the conference rooms of Apple envious looks are thrown in the direction of, for example, Paramount — which has magically leveraged a not-too-popular space opera into a multi-decade cash-cow. Fans argue whose Kirk is better, Chris Pine’s or Bill Shatner’s, and Paramount sits back and counts the money.

You could easily reboot The Monkees, and nothing would be harmed. But The Beatles weren’t a TV show; they were real people living through a real era, and the work they created can’t be taken out of its historical context without something essential being lost. Having Alex Ross come behind Heinz Edelmann is, I would argue, the same thing as Apple allowing contemporary musicians to re-record all the Beatles’ LPs in a contemporary style — then branding them and selling them as “authorized reimaginings” of the originals. How typical, how terrible. If they suck, they injure the originals; if they don’t, they reduce the originals’ artistic authority.

The Fabs were dubious about Yellow Submarine, with good reason; it should have been terrible. I’ve called it their last great stroke of collaborative luck. That the movie works is nothing short of a miracle, and it works because it is a seamless whole. A lysergic Fab fable of good versus evil, its distance from reality is what gets its point across, and the point is lost if you reimagine the Chief Blue Meanie as a normal human being with tattooed skull and a weird nose. It is a fairy tale, and while applying realism to a fairy tale is a great mechanism for comedy (says the author of Barry Trotter), stories so told have no mythic power.

The movie was developed in 1966 and ’67, concurrent with psychedelia at its most confident and Utopian, and every aspect of its design reflects this. It is optimistic, brightly colored, abstracted, allegorical, eccentric — I’d call it switched-on steampunk. One cannot update this successfully, any more than one can update a Depression-era screwball comedy. Taking Yellow Submarine out of its historical context is like bringing a voluptuous gossamer jellyfish to the surface; unsupported by its environment, it becomes garbage, a pile of senseless membrane, suffocated by contact with our world.

The problem here isn’t Ross’ art, which is as ever technically brilliant (great draughtsmanship, great composition), though slightly flat-footed — these drawings are what I imagine Yellow Submarine would’ve been like if Hitler had won the war, half psychedelia half-totalitarian realism. Though I enjoy seeing Ross’ answer to the question “What would a Flying Glove really look like?” I also have to marvel at the hyper-prosaic mind that paid him to ask it in the first place. Such a mind seems to me destined to miss the whimsy of Yellow Submarine — Jeremy isn’t some weird being, he’s a mime dressed in a woolen trash-bag — and Yellow Submarine without the whimsy has all the charm of a dead jellyfish.

But of course this is utterly predictable, and probably inevitable, as the Beatles turn from glorious historical fact into a schlocky pseudo-religion. Every old man has to find his griping topics and folks, I’ve surely found one of mine. 🙂