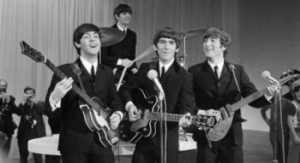 So many stars had to align for the Beatles to come blazing forth. Without a slew of key elements—the end of compulsory National Service in 1960, Hamburg, Brian Epstein, and George Martin, to name just a few—The Beatles as we know them might never have been. Of course the band needed to be those four guys, together resonating far beyond the sum of their parts. But the most essential element in The Beatles’ story was the Lennon-McCartney partnership. It was a connection that could only be forged from the dreams of youth, a marriage that was arguably deeper and more fertile than any conventional one. It was nurtured both by shared sorrow and shared visions of glory.

As I make my way through my third McCartney biography, Peter Carlin’s, I yet again find fascinating the symbiotic dance that in the early days drew out the powerful collusion of Lennon-McCartney. It may just be that this material on Paul is fresher in my mind, but I find myself leaning towards a view that McCartney provided more than his share of the dynamism that fueled the dynamic duo. Paul, alone of all the Beatles, had everything he needed to be a star—talent, drive, calculation, and charm. 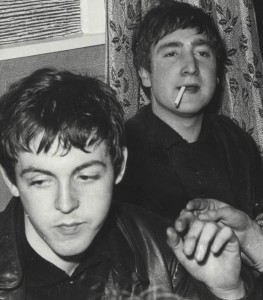 Before Paul joined the Quarrymen, they had been as much a gang as a band. Rock ‘n’ roll had electrified John, to be sure, and he had the raw talent, but he was impatient. He may have loved the idea of being Elvis more than the reality. John’s magnetic personality simply corralled his closest friends, regardless of their talent or even abiding interest, into a reasonable facsimile of a musical group and got them out there flailing about. John was the unquestioned leader. His personality required it. But it’s not as if this leader knew what he was doing. He didn’t have a plan beyond, “I’m John Lennon. Look at me!” He wasn’t exactly scouring Liverpool for the best musical talent. Someone else would have to do that for him.

John may not have actively pursued assistance, but he always left openings for it. When the right person came along, he let them in through the little chinks in his armor. He instinctively knew he needed a partner, whether Paul, Stu, Cynthia or finally Yoko. Let the Bob Dylans go it alone—John needed help.

When it came to kicking his band up a level, Lennon’s immediate savior was his pal Ivan Vaughan. Bless that boy’s heart! It’s Ivan we have to thank for introducing Paul and John. (Vaughan’s death from Parkinson’s in 1993 moved Paul to turn to poetry for the first time since he was a boy. The poem “Ivan” appears in Paul’s book Blackbird Singing.) Vaughan took it upon himself to tell Paul about John and suggested they meet. John was wary at first, that day “backstage” at the Woolton fete. And even after Paul’s bravura performance of “Twenty Flight Rock,” John wasn’t sure about letting him in. He could be a threat.

John had the swagger and the snarl, but his glimpses of his own genius flickered wildly. Paul’s confidence was steady, foundational. (It never seems to have wavered over the Beatle years.) When Paul auditioned for John’s band it was not only his skill but his assurance that impressed the boys. Paul knew he was good. Without the steady blaze of Paul—like a home hearth for his partner—John would have died in the cold. 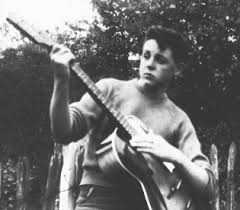 After Vaughan’s introduction, Paul was John’s newest—and greatest—savior. Things started changing. Paul brought professionalism and a kind of discipline to the band. He became the de facto musical director, showing John how to properly play guitar (John was using a banjo tuning), providing harmonies, and even showing drummer Colin Hanton what rhythms to play (thus speeding Hanton’s departure from the band). It was Paul who got George Harrison into the band too. Paul recognized George’s talent, but John at first rejected the guitarist as too young to look cool in a rock band. Paul had to gently persist. He made sure musical considerations trumped superficial ones. Paul would of course go on to make a good claim as the best bass player in rock. In The Beatles, he was also the best piano player and maybe even technically the best lead guitarist and drummer. He also had a heavenly sense of harmony and led the Beatles charge into musical experimentation. Paul just was music.

It’s to John’s credit that he could allow his ego to step back where musical matters were concerned and allow Paul to call the shots. And if John occasionally needed to metaphorically slap Paul around, well, Paul could accept that as part of the package. There was an unspoken understanding of how the ship would be co-captained. John’s role was more passive. He may have drunkenly shouted orders every now and then, but as long as everyone pretended to listen, they could all sleep it off and do things Paul’s way in the cold light of morning. We can imagine, for example, John making the obligatory snide remarks about wearing matching suits, and the other three snickering along, even as they were all being measured for a perfect fit. 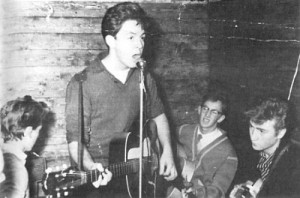 Paul’s genius wasn’t the temper-tantrum-prone, self-destructive, moody type—making it all the more remarkable. It was matched with the charm of a diplomat. According to Carlin, Paul possessed this skill from his earliest years. As a schoolboy, he served as a sort of unofficial liaison between students and teachers, effortlessly keeping an irreverent foot among his peers and a respectful one among the faculty, never losing credibility with either group. He served the same function for The Beatles, softening their rough edges for the establishment, cannily flashing his cherubic smile, somehow managing to be both cheeky and polite, often simultaneously.

Paul and John as each other’s alarm clocks

For all Paul’s reputation as the softy crafter of lovey-dovey pop ballads, he was in his own way as steely as John. They both had shells around them. John’s was just more dramatic and spiky. John could beat the shit out of someone but also open up like a child—all unruly impulse. Many have noted, though, that Paul’s shell was deployed craftily—and rarely came down. He could be the life of the party, earnestly asking after your welfare, oozing warmth and wit, but there was a way you were kept separate at the same time—some inner space you only got to if you were John, maybe, or Linda. There seems to have been more than a little of Machiavelli in Paul. We are told that at their first meeting with Brian Epstein, Paul arrived late on purpose, as a way to demonstrate power—and then pulled Epstein aside to inform his new manager that the band was all well and good but that no matter what, he, Paul McCartney, was going to be a star. (I don’t think that story, if true, necessarily means Paul didn’t care about his friends.) 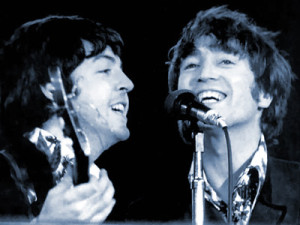 John of course wanted to be a star too. He wanted to make it. But part of him also couldn’t be bothered. His genius and ambition were mixed with equal parts laziness and pride. The knocks John’s artistic soul had taken (unfit parents, the death of a father figure, then the death of his mother) left him right on the edge between self-destruction and success. The great blow of Paul’s early life, the loss of his own mother, may also have been the cause of his shell. But even in the early days, Paul put that steel to good use. He started playing the guitar—all the time, obsessively. And after glimpsing the promise of his partnership with John, he relentlessly pursued it. When John withdrew in the months following his mother’s death, it was Paul who kept at him, tactfully yet persistently refusing to let the music—his vision—die. Later, when John again backed away from the band in favor of art school and his new friend Stu Sutcliffe, Paul kept showing up, guitar in hand. He wasn’t letting this fellow-genius go. It was as if John would occasionally fall asleep, not care, and Paul would be there by the side of the bed, shaking his shoulder, “John! Wake up! Wake up!”

But it’s not that simple. And this is why the partnership is so beautiful. John had woken Paul up too. Twice, actually. John’s role for Paul was not as the steady warmth of a hearth, but as a bolt of lightning that zapped him at just the right moments.

For even though Paul’s mum had died, even though Paul was obsessed with playing guitar, even though Paul had entertained scores of kids at summer camp and even thereby gained some female admirers—even though, in other words, Paul had all the makings of a driven, brilliant musician—he wasn’t headed in that direction before he met John. Paul wasn’t even thinking about forming a band it seems when Ivan invited him to meet John. He might have, had John not come along—who knows. But I think in most parallel universes in which Paul never met John, McCartney goes on to become a teacher. I don’t think there’s anything eccentric enough in his environment to knock him out of the default, work-a-day path most people around him were on. I don’t think there was anything that reflected back at Paul a vision of what he could be. Except for John. 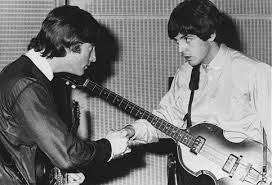 The second time John woke Paul up was after they returned from their first trip to Hamburg. They’d been booted out, actually. They had defected to a rival club, goading their jealous ex-boss to tell the authorities that George was too young to be working (true) and moreover that John and Paul had tried to burn his bar down (false). The band trailed home haphazardly and went their separate ways. George even joined another band. Paul, at his father’s urging, got a job. It was some boring job but, being bright, Paul began working his way up in it. According to biographer Carlin, Paul was ready to accept this as his lot. His “bourgeois” upbringing (an insult that has dogged Paul throughout his career) had overcome his ambition. Until John showed up on the job site one day and said something to the effect of, “What the hell are you doing, mate? Let’s get the band back together. Let’s rock ‘n’ roll!” Paul jumped the fence and never looked back.

Chris has written comedy, screenplays, comedy screenplays, poetry and pop songs. He blogs at nosuchthingasastraightline.wordpress.com, and has released three Crooked Roads CDs. You can listen free to his latest music here.