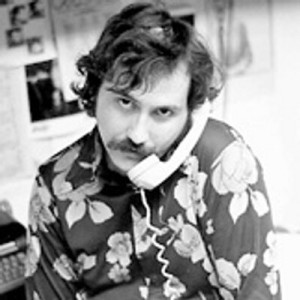 Lester Bangs declared the Beatles “nothing” and hated A Hard Day’s Night. To be sure, he despised plenty of other bands. If you rate Bangs as a great critic (I don’t), you pretty much have to relish his talent for insult. Bangs’ animosity toward the Beatles, however, was particularly barbed. In 1975 he printed, in both The Real Paper and CREEM, an eight-page screed damning not only the former Beatles’ solo work, but the entire legacy of the band. Reading “Dandelions in Still Air: The Withering Away of the Beatles” in 2016, I thought: wow, this band really gets under his skin, to the point that he wants to drive a stake through its heart. Why was doing that so important to him?

Bangs starts by asserting that of all the 1960s superstars, “the four splintered Beatles may well have weathered the pall and decay of the Seventies the worst.” Somewhat surprisingly, he considers McCartney’s solo career the most credible of the four, though he describes Band on the Run as “Muzak’s finest hour” and says that if Paul “was just a little more gutsy, he might almost be Elton John.”

But this is just a warm up for his attacks on Lennon, Harrison, and Starr. Lennon will “do anything, reach for any cheap trick, jump on any bandwagon, to make himself look like a Significant Artist.” Of Plastic Ono Band he concedes that it “had a certain gauche and wretched majesty” deeply marred by “its embarrassing infantilism and freelance spite.”

George Harrison “belongs in a daycare center for countercultural casualties”; his preachiness “would be monumental chutzpah if it weren’t coming from such a self-centered nebbish.” Ringo Starr “is beneath contempt. He used to be lovable because he was inept and knew it,” but now produces work that “reeks.”

Bangs goes on to ponder why he is “constantly hearing people say” that while they can still enjoy early Rolling Stones albums, “old Beatle records . . . and particularly Sgt. Pepper, gather dust on the shelves.” But here the piece takes a turn that surprises and interests me. As Bangs considers why the Beatles made it so big in the first place, it seems clear to me that his ferocious dislike is just the flip side of a joy he once took in them and now can’t bear to revisit. 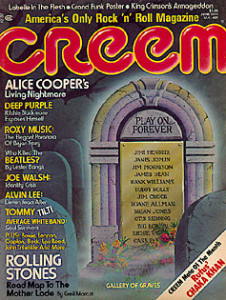 The June 1975 issue of CREEM, in which Bangs’ piece appeared.

For me Bangs’ value as a critic inheres not in his insults, but in his compulsion to analyze, even when analysis leads away from the emotions his insults articulate. He says some smart things about the Beatles’ appeal in the wake of JFK’s assassination, and the magic that they possessed as a group. He describes the first time he heard the Beatles, and the way the end of “I Want to Hold Your Hand” – “I get hiigh” – caused him to stand in awe and think “The Beatles in the sky.” He goes on to say that perhaps the difficulty of listening to Beatles albums is bound up in the way “the Beatles’ decline also parallels the decline of the youth culture’s faith in itself as a homogenous group.” What’s striking in this portion is the palpable sense of loss, of betrayed hopes. And here, I’d say, we have the real roots of Bangs’ blaring disdain for the Beatles.

The ending he chooses suggests that it’s less painful to declare the hope the Beatles represented wholly illusory than to grapple directly with the loss of that hope. The last paragraph is so important I will quote it in full:

The death of the Beatles as a symbol or signification of anything can only be good, because like the New Frontier their LOVE nirvana was a stimulating but ridiculous, ephemeral and ultimately impractical mass delusion in the first place. If the Beatles stood for anything besides the rock ‘n’ roll band as a communal unit suggesting the possibility of mass youth power, which proved to be totally fatuous in short order, I’d like to know what I have missed by not missing the Beatles. They certainly didn’t stand for peace or love or true liberation or the brotherhood of humankind, any more than John Denver stands for the preservation of our natural resources. On the other hand, like Davy Crockett hats, zoot suits, marathon dances, and bootleg alcohol, they may well have stood for an era, so well as to stand out from that era, totally exhumed from it in fact, floating, light as dandelions, to rest at last on the mantle where, neighboring your dead uncle’s framed army picture, they can be dusted off at appropriate intervals, depending on the needs of Capitol’s ledgers and our inability to cope with the present.

I think Bangs betrays his anxiety that the Beatles aren’t dead by his insistence that they are, they are, they really really are. They are nostalgia, they are artifacts, they have nothing to say to us today, their music can only be escapism. “Dandelions in Still Air” is essentially a sermon, and like many sermons, the speaker’s urgent repetitions sound to me like an effort to convince the speaker as much as the hearers that what is being asserted is true. In the end I don’t feel offended by Bangs’ insults or persuaded by his contentions. I just feel saddened by Bangs’ apparent inner conflict and very, very far away from 1975, when I was in early elementary school and hadn’t yet discovered the Beatles, who would go on to play an unexpected role in my aesthetic and emotional life as an adult. The world looks mighty dark to me these days, but I don’t think the answer lies in turning away from hope or music that inspires it, however painful it can be when hope comes to grief.

Lester Bangs on the Beatles

Kiss as the Anti- Beatles