Get Back: The Beatles’ Let it Be Disaster

Get Back: The Beatles’ Let It Be Disaster (Doug Sulpy and Ray Schweighardt, 1994) 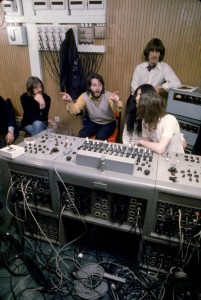 In January, 1969, The Beatles began a project that ostensibly marked their return to concert performances, something they hadn’t done in over three years. The project was the brainchild of Paul McCartney, who hoped that performing before a live audience would restore the group’s fading morale and creative ennui.  Michael Lindsay-Hogg was hired to direct a television documentary which was slated to accompany the concert’s live television broadcast.

Alas, the concert never happened, the band broke up, and out of the rubble came the feature film, Let It Be. The film became a de facto statement about the break-up, even though much of what happened during that terrible month was left on Lindsay-Hogg’s cutting room floor.  Not satisfied with the film version of the breakup, Sulpy and Schweighardt reviewed the unused footage with the hopes of gaining further insights.  The result is Get Back:  The Beatles’ Let It Be Disaster, an even-handed and often sympathetic account of the final days of the band.  Their account debunks the decades-old myth of Paul as Band-Destroyer, and supports the view that— far from being victims of Paul’s relentless perfectionism— the other three were, in varying degrees, saboteurs of Paul’s genuine attempt to save their collective interests.  And, in spite of her protestations, their account also demonstrates how Yoko’s presence and constant meddling had a scorched earth effect upon the group and everyone associated with them.

From the outset, it was clear to the authors that, far from pursuing leadership, Paul was frustrated and concerned about the leadership role being thrust upon him. John’s uncommunicativeness, in particular, impeded the band’s ability to move forward on creative ideas and resolve creative disputes.

The famous “fight” between Paul and George, depicted in the movie and overblown by Beatle pundits ever since, exemplifies this dynamic:

Paul, as he had several times earlier, expresses his desire that they work out the structure of the song before working on specifics. George disagrees, and believes they should just play until things come together. The conflict revolves around the different working methods of George, Paul, and John. John is withdrawn and uncommunicative…even for his own compositions.  This leaves Paul…as the only Beatle able to propel the rehearsals forward.  This isn’t a role he wants to assume.  He bluntly states he wants to encourage them, but worries that this will mean taking a leadership role in the group, which would inevitably lead to ruffled egos.   John admits his non-participation but says he has no suggestions to make. Paul, still trying to mend fences, stresses… there’s nothing personal against George. 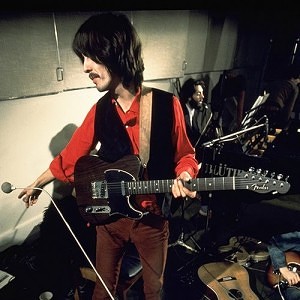 Drugs And The Yoko Factor

The extent of John’s incapacitation, and the devastating effect it had upon the group, cannot be overstated. His song output was at an all-time low, his guitar-playing was substandard, and he could not remember simple riffs or the lyrics to his own songs  (a problem he had at the best of times, but almost reeking of a drug-induced memory impairment now). The band’s reaction to this was interesting: while Paul vacillated between accommodation and careful confrontation, Ringo ignored the problem altogether while George seethed.  George, in particular, was enraged by Yoko’s unsolicited commentary during rehearsals and preeminence in business matters.  Indeed, it was because of Yoko’s interference in a business meeting, and not some altercation with Paul, that prompted George to quit.  As Sulpy and Schweighardt observe,

if there had been some conflict between George and Paul, one would expect to find some evidence of ill-will between the two. In fact, there are no negative feelings expressed, or even implied.  It seems that George had expressed his view [in the business meeting] that the future of The Beatles was a matter that should be discussed privately between the four members of the group. This would have implicitly excluded Yoko, but rather than having to choose between her and The Beatles, John appears to have pretended not to understand George’s request.  This childish behaviour angered George, who then walked out on the meeting.

While Yoko didn’t ipso facto cause the break up, her interference was the proverbial straw that broke the band’s collective back. Contrary to her revisionist claims that John “forced” her to speak and act for him, Sulpy and Schweighardt suggest that it was clear from even a cursory examination of the tapes that Yoko was a willing participant:

After several aborted tries [to discuss the live show], Paul, George, Yoko, and Michael discuss the theoretical uses of an audience.  John is present but silent. While Michael expresses the view that the band needs an audience [in response to Yoko’s suggestion that they play to empty seats], Yoko quite comfortably talks down to him. Her tone clearly indicates that, in her own mind, at least, she’s as important as any of The Beatles.  Although John is present, he contributes nothing to the conversation, offering as proxy Yoko’s generally unorthodox and self-aggrandizing observations.

Later on, in a private (but taped) conversation with his wife Linda, Michael Lindsay-Hogg, and Neil Aspinall, Paul correctly observed that the problem isn’t with Yoko per se, but with John’s acquiesce to her and her eagerness to act in John’s stead.  The rest of The Beatles, together with Linda, Neil, and Michael, discussed the issue thusly:

Linda, Neil, and Paul all see Yoko working her will through John, but don’t wish to confront him about it until they have no doubt as to what’s going on.  Not only do [Paul and Neil] see Yoko talking for John, but they feel that when they talk to John, they’re really talking to Yoko, since John’s only saying what Yoko wants him to say.  Paul is faced with a dilemma. If he confronts John, he’s sure that John will quit The Beatles and devote himself to Yoko (which, of course, is what ultimately occurs) but he sees the group disintegrating anyway, both because of the vacuum left by John’s creative withdrawal and George’s unwillingness to tolerate John’s behaviour.

Paul recognized that the frustration everyone was feeling was almost as damaging and disruptive as the behaviours which provoked it.  He attempted to diffuse the situation by minimizing John’s actions and suggesting tolerance:

[Paul] goes out of his way to explain how [Yoko] didn’t interfere when he and John were struggling with the lyrics for I Will the previous year. He then goes a step further and [claims] that when the two get really serious about something, John won’t let allow Yoko to interfere (if this is true, it’s not supported by the available tapes).  He admits that John and Yoko go too far in their relationship, but tolerates it because it’s characteristic of John to go overboard on things. He then explains it’s not really their business to tell John that Yoko can’t attend their business meetings and that all they can really do is express their displeasure to him.

Paul’s defense of John and Yoko was bolstered by his view that the Lennon/McCartney partnership was waning even prior to Yoko’s appearance, due to the fact that

they no longer shared the physical closeness that they had in the early years. [Paul] believes they still have the ability to play well, and that the real problem is their lack of communication.  Paul then reveals that the underlying motive behind [the project] was to force the group into the discipline of a 9-5 situation, claiming that even if it’s a grind at times, at least they’d be able to reap the rewards of their work.

It’s interesting to note that while there was much discussion about  John and Yoko’s co-dependence and the effect that had upon the band, there was no similar discussion about John’s heroin use.  On at least one occasion, Yoko asked John when Mal was going to purchase more heroin for them. Although it was asked cryptically, it occurred in front of the cameras and everyone else in the room, and there could be no doubt as to what the conversation was about. 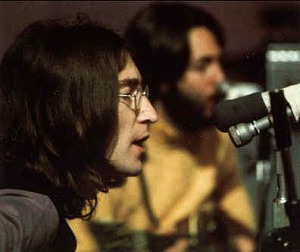 Can The Beatles Be Saved?

Regardless of Paul’s intention to inspire the band by a 9-5 work commitment, interpersonal tensions were exacerbated by the nebulous nature of the project itself.  Although the band was meeting regularly for rehearsals and a concert date had been selected, they still hadn’t come to an agreement about the actual venue. (This was hardly surprising, considering that one idea was to hire a cruise ship, bring several hundred fans aboard, and have the concert on the way to India.) One can hardly imagine such a cock-eyed scenario occurring if Brian Epstein was still at the helm, and speaks to how desperately they needed management oversight–something each Beatle recognized.

This notwithstanding, Paul seemed to be the only band member who clearly understood what was at stake if they didn’t get their act together and was understandably losing patience:

[Paul’s request that they clear the air] irritates George, who comments that past attempts to do this resulted in compromises no-one wanted to make. Paul answers by saying that if a live show turns out to be a compromise of that type then they should just give up and let The Beatles die. Almost enthusiastically, George agrees. Amazed and baffled at the thought of breaking up The Beatles, and cognizant of the artistic and financial havoc such an act would cause, [Paul] incredulously reminds the others how stupid it would be for them to break up.  Paul …complains that John talks condescendingly to them and then observes he doesn’t talk at all. The nearly hour long series of discussions has ended with nothing being resolved in terms of the show or the group’s future.

One can feel for Paul and his frustration. In spite of all the tension and creative impasses, this was a band that clearly still cared for one another and had the ability to make good music. Sulpy and Schweighardt note that frustrations with the new material inevitably lead to jamming the old stuff, mostly from the teenage Lennon-McCartney songbook. This prompted George to suggest that they perform the old material rather than new material, which may be more interesting to their fans anyway.  Yoko recoiled at the idea, and seemed “quite obstinately against the idea of The Beatles returning to their past, [presenting] the somewhat confused argument that people would rather see Richard Burton shaving than returning to his roots on the stage.” George’s suggestion ultimately never took root, and  discussions about the concert continued without resolution.

And In The End…

Sulpy and Schweighardt’s thoughtful study of The Beatles’ dissolution makes for compelling reading, and raises as many questions as it answers. Why, for example, do George and Ringo side with John in his ostracism of Paul, after living through two frustrating years of Yoko- and drug-inspired craziness and when John’s decision-making capacities are clearly impaired? How is it that none of The Beatles understood how serious John’s drug-taking had become? Why didn’t the band go on hiatus rather than attempt a project which was so clearly destined to fail? Sulpy and Schweighardt don’t offer explanations or provide any answers. Perhaps they left that for us as Beatle fans, to figure out.