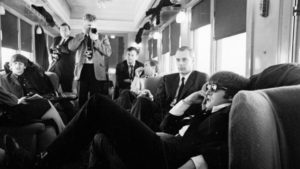 Well, I finally went to see the much-anticipated Eight Days A Week last night at 10:00 in the p.m. Why so late? Because I’ve been working eight days, etc etc.

I know the story, backwards and forwards, and so do you. So going in, I expected nothing, especially after reading Nancy’s review which suggested a surface take. And a surface take it was indeed — but I loved it. I think you should see it; in fact, I think every serious Beatles fan should see it. Here’s why: there is so much new footage, and it is so eye-poppingly pristine, that Eight Days A Week conveys a tremendous amount of excitement in spite of its apparent desire to be the most inoffensive Beatles film ever made. Eight Days A Week makes A Hard Day’s Night feel like a gritty exposé.

This is a very Hollywood picture. That’s what it wants to be, and that’s what it is — which means that very little of the reality of touring comes through. As Nancy said, sex and drugs are hardly mentioned, and as I said, that makes the narrative so polite as to be a trip through Pepperland. Nothing the least bit controversial is mentioned, even when it is utterly central to the topic at hand: Brian’s “paper bag money,” for example. And even when there is a revealing tidbit within easy reach, the movie seems go to some lengths to avoid it; the Washington embassy party is mentioned, but not Ringo’s storming out after someone tried to cut his hair. What could be a better example of how people didn’t treat the Beatles as human beings, even in February 1964? How the adulation was utterly conditional, and had an undercurrent of children mistreating their toys from the very first scream?

This staying on the sunny side makes everything feel somewhat nebulous and unmotivated. Dark and grimy Hamburg, the inescapable wellspring of the Beatles’ magic, is dismissed in three minutes and a silhouette of a stripper. How did the Beatles become so wonderful, so magnetic onstage? Not asked, so not answered. The Litherland Town Hall gig — supposedly the first time The Beatles were THE BEATLES — isn’t mentioned; the Royal Command performance isn’t shown; and so forth. Eight Days A Week is really about American Beatlemania, and the Boomers who still remember it fondly. Anything else just can’t keep this film’s attention.

If you didn’t know that the Fabs’ very nearly didn’t make it out of Manila alive — in other words, if you hadn’t already watched Compleat Beatles and Anthology — you won’t learn it from Eight Days A Week. Mal Evans, the heart and soul of the Beatles’ touring experience, is barely mentioned. Instead, we learn that Sigourney Weaver spent a lot of time picking out her dress for the Hollywood Bowl concert.

All this isn’t simply marketing, though some of it surely is; rather, it’s the result of a conscious decision from the jump to let moving images have pride of place. This inevitably skews the documentary towards what can be seen, and what looks best. Nobody sat Mal down with a film crew, to talk about the Beatles’ Satyricon (Lennon’s description, which is burned into the brain of every serious Beatlefan, is not repeated here). There is a peculiar pulling away from anything that might disturb a preteen; not just the conspicuous lack of sex (marijuana is referenced briefly, and never by name), but also anecdotes like the famous “Beatles, women and children first” flight, Jeanne Dixon’s rumored prediction, and Brian’s deterioration in ’66. The closest Eight Days A Week gets to any of this is a roadie talking about the possibility of electrocution in St. Louis in 1966.

But while this makes Eight Days A Week suitable viewing for your Beatles-mad seven year old, it precludes any deeper understanding of what touring was really like for them. Everything but the Beatles themselves is lacking in color. Their decision to stop, for example, comes across as a bit feckless — like they were merely fed up, restless — when in fact we know that it was a desperate grab for their sanity. And the film misses a real opportunity for drama by not emphasizing how, in 1966, pop groups that didn’t tour were essentially defunct, so the stakes in this decision couldn’t have been higher — and informed McCartney’s gambit to remake them into Sgt. Pepper’s band. Nor does it explicitly mention that “Get Back” was an attempt to relight the group’s internal spark via live performance; that’s how essential playing live felt to the Beatles themselves. Or how that attempt foundered in part because they couldn’t figure out how to bring the post-Pepper Beatles music alive onstage. This sets up such a wonderful point: that the Beatles’ relentless genius slowly but inexorably weaned them away from what kept them growing together as a unit. In this reading, not John’s heroin or Yoko or Klein broke them up — they simply got too good. Interesting thought.

The interview material — even that provided by the Beatles themselves (new interviews with Paul and Ringo, Anthology-era stuff from George and Neil, older stuff from John) is pleasant and inessential. The celebrity interviews from Whoopi Goldberg and Sigourney Weaver are nice enough, but only notable because the speakers are Famous People. There is only the vaguest attempt to locate the experience in a larger historical context, and no analysis to speak of. The film’s vaunted examination of the Beatles’ internal workings really comes down to Paul’s “all decisions were unanimous” post-lawsuit talking point, and a bit about only having an hour and half in Studio Two, from 10:30 am to noon, so that made for greater discipline.

But Eight Days A Week works, by God, and it’s another testament to the amazing alchemy of John, Paul, George and Ringo. It is a doggedly conventional portrait of four great eccentrics. They are mesmerizing onscreen, and their songs are, well, the greatest art of the 20th Century. Taking the film on its own image-over-substance terms, my only serious quibble was with the lack of context — I longed to see a map of any of the tours, showing distances traveled over how many days; I chafed when they mixed chronology in the photos; I chafed further when I knew a fact that would’ve hammered the point home. There has to be a space between trainspottery tidbits like knowing that the crowd noise that begins Pepper comes from “Beyond the Fringe,” and watching well-groomed and mainstream Boomer celebs enthuse over what it was like to scream at the Beatles.

All that having been said, it was the quickest two hours and twenty-five minutes I’ve spent all year, and when the Shea featurette faded out I was truly sad to see it end. Because there were the guys, in living color as they used to say, doing what they did best. The music sounds great, the band looks great. Whatever else it may be, Eight Days a Week is a reminder that, for a brief moment, the West was welded together in appreciation of something genuinely harmless and wonderful. Last night I was depressed by the debate, as who wouldn’t be… but a world that allows Beatlemania to happen, well, it can’t be all bad, can it?