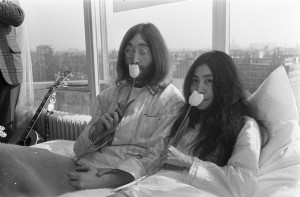 “Yoko, smell this flower! It’s like I’ve never even smelled flowers before!”

In 1969, Gerald Le Dain, a Canadian lawyer and Supreme Court Justice, headed a government commission on the “non-medical” use of cannabis and other drugs, with the ultimate aim to develop pertinent social policy.  This commission, which ran from 1969 to 1972, was known as the LeDain Commission of  Inquiry Into the Non-Medical Use of Drugs.

Le Dain sought input not only from medical, legal, and law enforcement sources, but also from well known celebs like our very own John Winston Lennon, who gave private testimony while on his honeymoon in Montreal.

Mr. Lennon and Pot: What do you think he said?

The backstory to obtaining John’s testimony is almost more interesting than the testimony itself. Back in 2002, a man by the name of John Whelan, working on behalf of the Ottawa Beatles Web site, was interested in obtaining John’s testimony file and tracked it down via the National Archives of Canada. When he discovered that all testimony files were confidential, he exercised his right under the Access to Information and Privacy Act to have it released.  Because John was no longer alive and had been deceased for at least 20 years, Whelan was able to access John’s testimony file and with Health Canada’s permission, make it available to the public. Yoko’s testimony, on the other hand, will remain classified until  her death and for 2o years thereafter. When you read the testimony you will see Yoko’s name and the all-too-familiar black magic marker a la Valerie Plame. All very cloak and dagger, don’t you think?

(p.s.  The commission recommended that the government consider the controlled use of cannabis but that recommendation was largely ignored.)