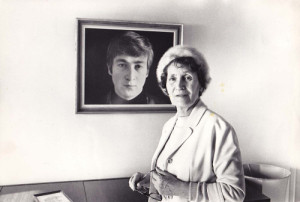 Sometime in the mid-70’s, John wrote a letter to his Aunt Mimi asking her for information about the family genealogy. Mimi replied in the form of a recording. I found this little gem on Amoralto’s excellent tumblr blog and wanted to share it with fellow dullbloggers.

But first, a little background on the lady who played such a significant role shaping the personality of one of the biggest rock artists in history.

a sharp-tongued, high-principled, duty-bound young woman….There was nothing, no situation or dilemma, that Mimi was unequipped to handle. Her method was very simple: everything operated on the axis of decorum and honesty. It was all black-and-white: either you measured up or you didn’t. Where the younger girls dreamed of starting families, Mimi dreamed of challenges and adventure—the kind that demanded an unusually stubborn independence. “I had no intention of getting married,” she told a curious admirer, dreading the prospect of “being tied to a kitchen or a sink.”

But marry she did, after a seven-year courtship and an ultimatum from her suitor, a milkman by the name of George Smith (“Look here! I’ve had enough of you! Either marry me, or nothing at all!”). They never had children of their own, which didn’t come as a surprise to the family, since Mary had always claimed she wasn’t the mothering type.  However, by all accounts Mimi was enamoured of John and ultimately took charge of him after placing several calls to child protective services, when she learned that the boy was sleeping in the same bed as his mother and her new boyfriend, Bobby Dykins.

As a retired practitioner in child and family mental health, I’ve always found Mimi Smith a fascinating character, and perhaps, ultimately a tragic one. For, in spite of her intelligence and common sense, I think Mimi was ill-equipped to raise a child who came with as much emotional baggage as John. Parenting a child like this–particularly one who so resembled her in temperament–required a certain kind of emotional and intellectual flexibility that Mimi simply didn’t possess.  While she knew her nephew extraordinarily well, she never really understood him. That lack of understanding, I think, hurt them both deeply in the end.

Without further ado, then, here’s the transcribed recording.

Now, you needn’t, for a start, send any B. S. genealogist down here, giving him a fine old holiday tramping around graveyards. What a good old time he must have had! This thing must have cost you a fortune.

Now, it’s in front of me, and I’m going to read it out to you, and you can’t deny it because every word in it is true: Alfred Lennon married Julia Stanley. He was born the 14th of December, 1912, and Julia was born on the 12th of March, 1914. And of course, they produced John Winston Lennon, who married Cynthia, daughter of Charles Edwin Powell. Married the 23rd of August, 1962, at South Liverpool.

What’s this rubbish you’re talking about? “You wouldn’t mind donating your money to a real socialist government?” For heaven’s sake. Use your nut. There’s no such thing. None at all. Not where money’s concerned. Money corrupts.

You watch yourself, my lad. You’re digging your own grave, and in no uncertain manner. Idealism is not the exclusive prerogative of English, Welsh, Irish, or any other nationality. It just happens. And you will wake up one of these days disillusioned and sad. You’ll be the tool of unscrupulous people who’ll exploit your idealism. And it will be a sad day for you, I’m telling you.

My dear boy, you are not the second Messiah. You are never likely to be. And that’s the way you’re behaving these last few years. Would you please understand that you are a speck in the ocean, and the only possible importance you can be is to people who are trying to get money out of you. And that’s perhaps why they’re – they’re around you. There’s no other reason, John. [laughs; bleak] None whatever. Do wake up, John. And remember the old saying: “The cobbler should stick to his last.” And your last is music.

And get out of this little – circle, that you’re in. It bodes no good for you, I’m telling you. Why do you think you’re having such trouble trying to get this permit to stay in America? It’s not for smoking a bit of cannabis. George Harrison smoked cannabis, but he was allowed in. It’s your activities there, boy, and you’re digging your own grave. And it makes me very very sad, because I know, in the end, you’re going to be hurt. Bitterly hurt.

For years, I’ve heard you yelling and shouting about love, but it seemed to me your heart was full of hate. And it showed in your face. I had an American reporter here about three months ago, and he was telling me that you had put it out that you were never wanted, that you were never loved. And this newspaper were willing to pay me to give my opinion of you – my personal opinion of you and your behavior over these years – and told me I would be well paid for it. Since when has money healed wounds? I soon sent him packing.

I’ve been hurt. Cut to the quick. What do you think I felt like, when I’ve been with those Beatle parents, and have heard what they’ve done, for them? I was foolish enough to think, as I had you, and waited for you to be born, that I was father and mother to you. But my goodness, John, you didn’t want me. [laughs; bleak] You didn’t want anything to do with me. And a lifetime’s work was just thrown on one side as nothing.

And you say The Beatles were dumb. They may have been… but in many respects, they could’ve taught you a thing or two. The first thing they did was to make their parents secure. Forever. Knowing very well that they would always get it back. But oh no, you, right, left, center – anyone could have in. And then I had to ask you, this year, to help me out – a terrible thing for me, I’m telling you, it nearly killed me. I’d had the same money from 1962, and anybody with a little thought would have known that what I had was melting away, during that eleven years.

And it seems as though you hated the sight of me. You couldn’t bear the sight of me, and you never missed an opportunity to cut me down dead – in front of other people as well, which was even worse. But it didn’t do you any good, for people noticed. But you were very kind to Alfred Lennon, taking him round the West End and having him in your home. I don’t suppose it ever once crossed your mind that that would hurt me. Especially when you couldn’t stand the sight of me.

In your teens, I was hard to live with, and if I had to go through it again, I would still be hard. And you know why, too. You were determined to do things which you knew were wrong, and I was determined that you wouldn’t, and if I hadn’t been interested, I would have let you do exactly as you liked – and you know how those children turn out.