Eagle-eyed commenter Sonia posted this picture set regarding an earlier post, but I found it so striking, I wanted to give it a full post.

David Bailey took the ones on the left. Anybody know who took the second set? 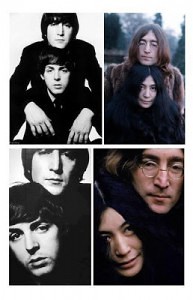 John and Paul and John and Yoko