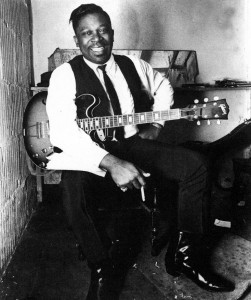 Few who enjoy this site have not enjoyed his music. Those who haven’t might take the time.

I’m no scholar of his vast (as in vast) recorded catalog. But you might start, as I did, with Boss of the Blues, a sometime-in-the-Sixties collection of Fifties sides, mostly R&B with large bands; or Live at the Regal (1971), thought to be by those who know (and I wouldn’t argue) one of the best live blues LPs in existence.

Or, as millions of others did, with his biggest hit, 1970’s “The Thrill is Gone,” which all morning has been providing obit after obit with a too-ready, too-fitting tagline.