Greil Marcus: “You won’t outgrow this” 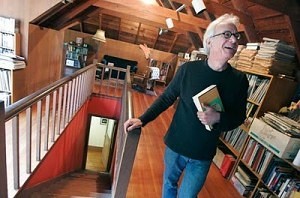 Greil Marcus, not outgrowing it.

Simon Reynolds:  . . .  [I]t just struck me how rock ‘n’ roll early on was teenage music, and even when it got arty and a little bit more grown-up, it was still caught in that sixties live-for-now mindset. Like Jim Morrison counseling “learn to forget.” Rock ‘n’ roll in the beginning was very much “don’t know much about history,” but then all of sudden you’ve got the Band doing “King Harvest” about the plight of farmers in the late 19th century, and a little bit later Randy Newman singing songs about slavery.

Greil Marcus: The Beatles are crucial in this, for both fans and musicians—like the guys in the Band. All our lives, from the time we became sentient beings and lost our lives to Little Richard and Elvis Presley, people were telling us “you’re going to outgrow this.” And in some way everybody believed we would: believed it with resentment, believed it with sorrow, believed it with a weary shrug of the shoulders, but believed it. But when the Beatles showed up, suddenly we—everybody who was still holding on to rock ‘n’ roll fandom, or rock ‘n’ roll as music you played, like the Hawks were, in nowhere bars—suddenly we realized, “no, you don’t have to outgrow this.” You can’t outgrow this, you shouldn’t outgrow this, and you won’t outgrow this. And that was really something. I don’t think anybody looked back after that. It might be something you might get sick of, that would wear itself out for you. But you were not going to outgrow it and go on to more mature appreciations.

For all the rest, go here.

You know my name