“Get Back” Halftime Report 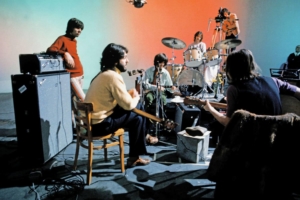 Folks, I’ve watched roughly half of “Get Back,” and had a few thoughts and impressions that you might be interested in. It looks gorgeous, doesn’t it? Great sound, great image quality, and that alone makes it a huge gift to the canon.

Before I do, however, I want to link to a Dullblog post I wrote in 2014, “Let It Be: A Missed Opportunity.” Re-reading it today I think it’s quite prescient. I am not saying that Peter Jackson or anyone at Apple needed to read my lil’ ol’ post to figure out what a better documentary might look like…but I’m always amazed at how far stuff travels, once it’s on the internet. If it helped, guys, you’re welcome. 🙂

First of all, Yoko comes off as a complete saint. There are times watching Get Back when I get so bored I can’t even, and yet she actually sat through all this without (unintentionally) screaming. Did Yoko Ono love John Lennon in 1972? 1979? 1980? All debatable—but in January 1969, she loved the guy tremendously. That’s the only way you’d be able to sit there quietly. Pure adoration, and opioids.

Second: I’ve always felt that the music on Let It Be didn’t really live up to the rest of their mature, post-’63 catalog, and nothing so far is changing my mind. Between the quick turnaround off of White, the tight deadline, and the pointless back-to-basics restrictions, it’s a wonder they could produce anything at all. I want to weep watching them spending so much time trying to improve “Don’t Let Me Down,” a song that—like it or hate it—simply doesn’t offer much musically or lyrically (Lennon’s vocal performance is great, though). “Two of Us” is pleasant, but like “DLMD” generates most of its magic from context; “John and Paul are singing about themselves and DON’T KNOW IT,” to quote someone in The Guardian, who was in turn quoting every Beatles fan ever. The group’s quality control—always their strong suit—is out of whack here, and it’s not just how they criminally neglect George’s songs. It’s also how they pass over richer, hookier, more compelling material (“Child of Nature,” “Gimme Some Truth,” “Suicide”) for B-level filler like “Dig A Pony,” or “Dig It,” or blues workouts like “For You Blue.”

Third: Paul McCartney is a freakin’ genius. Every review mentions the bit where he seems to come up with “Get Back” out of pure noodling (and George should get an assist here, because his guitar falls into the counterpoint immediately); this scene is truly thrilling to watch. Also thrilling was watching Paul respond to the group’s lack of material with “Let It Be” and “The Long and Winding Road” seemingly overnight. The film shows what we’ve all known, that Lennon wasn’t really writing much, and Paul was writing…effortlessly. Whatever you think about “Back Seat of My Car,” it’s a song any other group would’ve grabbed immediately.

Fourth: George Harrison is almost impossible to read. He’s apparently livid enough to leave the band, and also lives in a childish emotional world where he can do this casually, with an idea that they’d…just see each other “’round the clubs”? As if they’re all several of John Mayall’s endlessly rotating Bluesbreakers? George was terribly treated by Lennon and McCartney, but he’s also passive-aggressive as all hell, and dare I say it, immature? You think your songs are great? Come in with full demos you did with Klaus and Eric! You’re pissed about not getting space? Declare you’re doing a solo record! George waited until the group was over before he did what a musician of his calibre should’ve done in 1967—so it’s not just about John and Paul being assholes, it’s about George refusing to fight for his own talent, and guys like John and Paul would need to see you respect yourself before they respected you. And that’s appropriate.

Fifth: The conflict with Paul and George (and to some degree, Paul and John) seems to be one of method. It seems Paul liked to come to the studio with songs already worked out, whereas George and John liked to work them out through jamming. So Paul was sort of always working, whereas John and George wanted long stretches of life where they were not Beatling. This difference could be finessed after Pepper, where the Fabs could spend as much time in the studio as they needed, but given the rules they’d set themselves for Get Back, something had to give—which was the band itself. This is what I hear when John and George talk about “recording at home”—they want to improvise, whenever the spirit moves. Paul, being the most musically fluent of the four, clearly has songs and whole arrangements coming to him at once; improvisation might, for him, make an idea less clear. In the context of these quick and public sessions, I can understand why Paul was anxious and hard-driving; but ultimately he needed to accommodate George and John—they were Beatles, too.

Sixth: Michael Lindsay-Hogg can’t read a room. Or Peter Jackson wanted to use him as comic relief, knowing that Get Back would be compared to Let It Be.

Eighth: John Lennon is a lot more functional, a lot closer to the pre-India Lennon than I expected. But—and this is a big thing—there seems to be a big hole in the band where he used to be, and that’s probably the source of the conflict between Paul and George. Whether Lennon was zonked on H, bored with Beatling, or both, is impossible to know. But this film demonstrates that The Beatles needed a full-strength Lennon to function, and these sessions seem to make magic or bog down in direct proportion to how much energy and enthusiasm John brings to the scene. Which leads me to…

Ninth: When John’s not there, he’s really not there. There are a few scenes in Part 1 that are painful to watch—he’s not quite on the nod, but it’s close enough, especially compared to when he’s really engaged—and the band just flounders. Some commenters have decided that Lennon’s heroin addiction wasn’t all that bad as a result of this film, which is exactly what I was worried about in pre-release post after comment after post. “We do not see John drooling with a needle in his arm” is turned into “John wasn’t really that bad” or “Drugs HELPED the Beatles, Mr. Judgy!” But we know John was seriously addicted, because he wrote a whole song about a horrendous kicking experience seven months later, and from other interviews. He is impaired—not as impaired as I expected, and I’m glad for that, but in January 1969 he’s living the junkie’s life. You can tell how ill someone is by the wreckage around them.

I said it before: if you want to see the politics of this film—the artistic choice to tell one story and not another, via what is shown and not shown—look at John. If I found Vacant John hard to be with, surely Peter Jackson did too. And you’d have to be pretty heartless not to want to protect the reputation of a man who gave all of us so much, and was killed so young by a crazy fan. I feel that impulse here all the time.

A similar point of politics: the fact that Yoko spoke for John at the meeting at Ringo’s house after George left the band. That’s mentioned in the film, but since there is no footage or sound, not documented. You can’t understand the breakup of The Beatles without really feeling the alienation, and aggression, of stuff like that. Why the hell was John Lennon no longer speaking for himself in band meetings? What made him either 1) so sensitive or 2) so furious at the other guys?

I’m really enjoying being with these people again, and am already sad to see them go. I don’t wish they’d stayed kids, or even Beatles, forever; but I do get a sense of just how much they, their music, and weirdly their friendship means to me. How much I care for them all as people. Michael Lindsay-Hogg is annoying in his prattling on about Tunisia—a young man, as they all were, with too much money and too much ego—but he’s absolutely right when he talks about how much The Beatles meant to the world in 1969. I think they mean more, now.

Ironically, that may well have been what drove John Lennon into the arms of heroin. Some people find it uncomfortable to be loved, especially if your inflated idea of them doesn’t match with their own lousy self-image. (Only half of Lennon thought he was Jesus Christ Almighty; the other half thought he was shit.) He certainly seems to have worked better when the world was against him; only Paul seems to have blossomed under praise. And the bigger he blossomed, the more pressure that put on the others.

More after I finish.

“Get Back” open thread