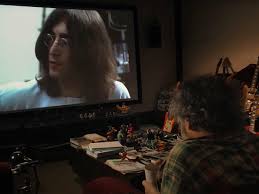 Peter Jackson’s “Get Back,” which was expected to be released in theaters this September, is now going to be a six-hour documentary on Disney Plus, premiering during Thanksgiving weekend. Variety reports that “each episode is approximately two hours in length, rolling out over three days, November 25, 26 and 27, 2021, exclusively on Disney Plus.”

So, more footage, but to watch it you’ll need a Disney Plus subscription. It will be interesting to see how all this plays out.

The Merseybeat gang, circa 1962