DEVIN McKINNEY  •  Hey! Let’s all wish Ringo the best on his 74th birthday. He’s still on tour, still looking great, still showing those peace fingers and giving a plug for love wherever he goes.

I wrote a little birthday tribute to Ringo over at HiLobrow, a pop-culture site where I often contribute (edited by the great Josh Glenn, a guest contributor of ours). I hope you’ll pop over and check it out.

Here’s something else I’ve wanted to say for a long time about Ringo, and it’s exclusive to Hey Dullblog.

Once, not more than a year or two ago, a vision came to me. It wasn’t a man on a flaming pie; for that matter, it wasn’t really a vision at all. More an idea. But it was more than an idea—it was a truth. No, it was more than a truth. It was The Truth. And The Truth, as always, was, once revealed, indubitable and unanswerable, at least by me. 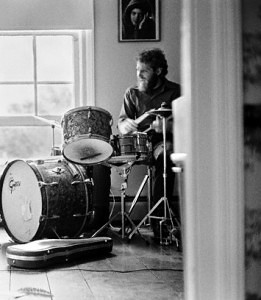 The Truth was that “The Weight,” anchor track of The Band’s historic 1968 debut album, Music from Big Pink—one of the most acclaimed of all popular songs, a standard of the late ‘60s rock repertoire, highlight of the Easy Rider soundtrack, coveted and covered by artists from Joe Cocker to Mumford & Sons, John Denver to Dionne Warwick, the Grateful Dead to Hanson, Aretha Franklin to Waylon Jennings—was no less than a rewrite, in terms taken from and just recognizable as populist Americana, of “A Day in the Life.”

The songs sounded so different, yet were so much the same. Each was about the journey through a friendless, loveless landscape of a lost man, a confused wanderer whose need—peace of mind—couldn’t be simpler or more impossible. Turn the lyric this way, the journey is comical; turn it that way, it is hellish. 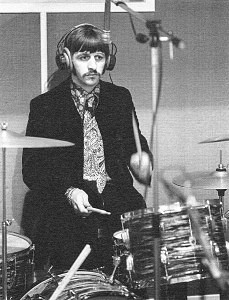 Sgt. Pepper came out a year (to the day) before Big Pink; musician Al Kooper, reviewing Big Pink in Rolling Stone on its release, immediately noted the Beatle influence embedded within it. (And I think it’s quite likely that the “Next of Kin” photograph on the inner gatefold, a large group shot of the Band members with their families, was a conscious or unconscious answer to the Pepper cover.) But I don’t think anyone has pointed out how “The Weight” seems to rewrite—not point for point, but as an essence, a narrative, a pristine modernism repositioned as a vernacular folk tale—“A Day in the Life.”

The second Truth that came to me, no less important than the first, is that Levon Helm’s drumming on “The Weight” owes, if not everything, then much to Ringo’s work on “A Day in the Life”—which I grow more convinced with each year is the greatest rock drumming that’s ever been done. In particular, the subtle rolls and fills that Helm uses to populate the bars between lines; and the slack, hollow single beats that mark distance between verses—the first sounding the submerged anxiety and fear of the narrative, the second the mute human need to move, to put one foot in front of the other, to make time as a way of staying, and being, alive.

Not that Helm didn’t have a panoply of other influences—Southern and Northern, rock-oriented and country-oriented and R&B-oriented—to draw from; not that he didn’t bring his personal style and intuitive brilliance to all that he did. But the Ringo influence here is, to my ears, so ringingly evident that it made me hear both “A Day in the Life” and “The Weight” in a new way.

And made it so sweetly logical that Ringo and Levon should have been such good friends for so many years, with Levon a mainstay on Ringo’s All-Starr tours. (I’d love to have been a fly on the wall as the two sat and drank and smoked and talked about Arkansas and Liverpool, blues and country, drumming and down-home stuff.)

And brought to mind again how little credit Ringo has gotten through most of his career for being the singular and irreplaceable instrumental genius that he is.

And reminded me that, even if fans and critics have often disdained him in their eagerness to prove that they know what rock drumming is, other drummers have never held Ringo in anything but the very highest regard.

Those who know, know.