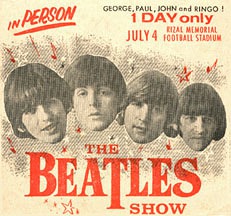 “Maybe your last chance to see the Beatles! Don’t ask how we know this!”

And what does the ol’ “to-post” file have for us this morning? Why, it’s a webpage dedicated to the Beatles in Manila, the feel-baddiest moment in all of Beatlemania.

We all know the story of their ill-fated trip to the Philippines — “snubbing” Imelda Marcos, their security mysteriously disappearing, Fabs and entourage making wills and quietly peeing themselves as they waited on the tarmac — but this site has some nice added bits.

(By the way, I’ve always assumed that it’s even odds the Beatles knew about the invite, but simply blew it off because they were hungover. Come on; they were rock stars, and what else is there to do in Manila after a concert? But I have no evidence for this, just a Spidey sense that this rather obvious likelihood was hushed up after things got violent, for better Beatle optics. And history proved the Marcos’ to be totalitarian assholes, so…)

After re-reading the whole thing, I’m amazed it didn’t get even uglier. The Beatles surviving the wrath of a tinpot dictator was perhaps the last great wheeze of Beatle luck; five weeks later, the guys were off to Chicago and the “bigger than Jesus” controversy would begin.

Or maybe it already had? Maybe Imelda’s gotten a bad rap; maybe the true enemies of the Beatles in Manila were a bunch of Filipino dudes named Jesus, sensitive about their height.