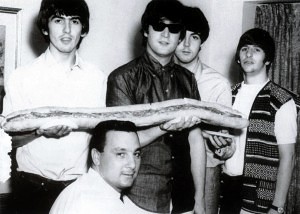 DEVIN McKINNEY  •  I’m the first Beatle Superfan to admit there’s a world of things I yet have to learn about them. That’s one reason Mark Lewisohn (look just to your right) is worth reading. So it’s with an ‘umble spirit that I report being both slightly let down and vaguely comforted, in a smug Superfannish way, by an annotated listing that appeared today at The Huffington Post, bearing the challenging though just slightly qualified head, “11 Things You Probably Didn’t Know About the Beatles, Even if You’re a Superfan.”

I won’t, of course, tell you what the 11 are; the fun of this will be in you deciding for yourself which of these tidbits truly warrant gasp! status among the Beatle-savvy. But I will say that, before I was halfway into the list, I was asking my laptop screen, “Really? Probably didn’t know? That?”

Only two of the things were news to me: #3, because I haven’t read the book that gives the information, though it’s been out for years and is well-known to fans, many of whom actually have read it; and #8, because this thing is not actually a “thing,” which is to say a fact, so much as it is a whimsy, a conceit—albeit a nice one.

But others, like #4, #5, #7, and #10, are so well-established, or at least oft-told, that the only excuse any Beatle Superfan can have for not knowing them is that he or she never learned to read. A couple of others (I’m thinking #6 and #11) will be familiar to anyone who stays moderately abreast of Beatle-relevant info that surfaces on the Internet.

But hey—all this cattiness is meant in fun. I give kudos to listmaker Todd Van Luling for at least five things: informing me of #3; exposing me to the whimsy of #8; leading off boldly, and pungently, with #1 (literally); giving those who maybe haven’t yet read many Beatles books a gander at the weirdness and glorioski that lie undiscovered before them; and reminding me of what I’d otherwise have forgotten to pause and take note of—that today is the 48th anniversary of the release of Revolver.

Thanks, Todd, one Superfan to another.