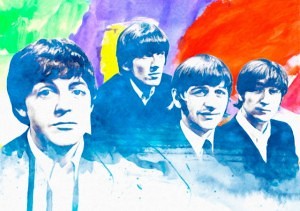 Yesterday, after reading Devin’s lovely commemoration of everybody’s favorite drummer (both here on Dullblog and on HiLobrow), I was quite tickled to find out — via Facebook — that Ringo shares a birthday with the current Dalai Lama.

Then, after I’d written this entire post, I confirmed the birthdays and found that Facebook was wrong. The Dalai Lama, born in 1935 as Lhamo Dondrub, made the scene on July 6th, while the ever laid-back Ringo emerged a day later on July 7th. I am keeping this post up, however, as a mute testimony to the dangers of trusting Facebook, especially for you young people.

Sadly, this post — which, as I read it over, is just peppered with errors I’m fixing — seems to sum up how things are going between the Beatles and the Dalai Lama. In 2008, Paul McCartney wrote the religious leader a letter asking that he stop eating meat. The Dalai Lama wrote back saying that his doctors have told him to do it for health reasons. Macca then wrote back saying that those doctors were wrong. I think that’s maybe where it stands now, or they’ve taken it behind closed doors to settle things like gentlemen. Paul does not realize who he is tangling with; those Tibetan doctors can argue for many lifetimes. Perhaps Paul will cut the Dalai Lama some slack on his birthday next year; after all, he will be 80.

The Beatles’ major point of contact with Tibetan Buddhism was, of course, the song “Tomorrow Never Knows,” which has spent many weeks atop the charts as my all-time fave Beatles track, in part because it’s so easy to sing. Here’s the song’s page on The Beatles Bible; the second page, about the various hacks they employed in the song’s recording, is particularly fascinating. This video runs down some of the details:

This is the relevant bit from Anthology. By the way, I love it when Paul gets the lyrics wrong; you can tell to him it’s just, y’know, another song he did as a kid.

“I am not too sure if John actually
fully understood what he was saying.”

The lyrics to TNK were inspired by Timothy Leary and Ralph Metzner’s take on The Tibetan Book of the Dead. One doubts Leary or Metzner asked the Dalai Lama or any other Lama for clarification — think of how many bad trips could’ve been prevented! In the Anthology, George spoke more about the track, its source, and Lennon’s relationship to both:

You can hear (and I am sure most Beatles fans have) Tomorrow Never Knows a lot and not know really what it is about. Basically it is saying what meditation is all about. The goal of meditation is to go beyond (that is, transcend) waking, sleeping and dreaming. So the song starts out by saying, ‘Turn off your mind, relax and float downstream, it is not dying.’
Then it says, ‘Lay down all thoughts, surrender to the void – it is shining. That you may see the meaning of within – it is being.’ From birth to death all we ever do is think: we have one thought, we have another thought, another thought, another thought. Even when you are asleep you are having dreams, so there is never a time from birth to death when the mind isn’t always active with thoughts. But you can turn off your mind, and go to the part which Maharishi described as: ‘Where was your last thought before you thought it?’
The whole point is that we are the song. The self is coming from a state of pure awareness, from the state of being. All the rest that comes about in the outward manifestation of the physical world (including all the fluctuations which end up as thoughts and actions) is just clutter. The true nature of each soul is pure consciousness. So the song is really about transcending and about the quality of the transcendent.
I am not too sure if John actually fully understood what he was saying. He knew he was onto something when he saw those words and turned them into a song. But to have experienced what the lyrics in that song are actually about? I don’t know if he fully understood it.

It’s doubtful, because John would’ve needed a teacher — and that’s not me talking, it’s Carl Jung: “The Bardo Thödol [Tibetan Book of the Dead] began by being a closed book, and so it has remained, no matter what kind of commentaries may be written upon it. For it is a book that will only open itself to spiritual understanding, and this is a capacity which no man is born with, but which he can only acquire through special training and special experience. It is good that such to all intents and purposes useless books exist. They are meant for those queer folk who no longer set much store by the uses, aims, and meaning of present-day civilisation.”

Queer folk John was, but given how skeptical he eventually became towards the Maharishi, it’s doubtful he’d have sat for the instruction, even from the Dalai Lama personally. (I don’t know what the Dalai Lama thinks about rock music, but Chogyam Trungpa, a famous wild child of Buddhism, confessed that he just couldn’t get into it.) The standard story is that Lennon asked George Martin to make him sound like a hundred chanting Tibetan monks. Here’s what that sounds like, so you can compare for yourself.

Finally, any of you not thoroughly tired out already might enjoy this documentary, narrated by Leonard Cohen. I personally found it quite…(wait for it) enlightening.