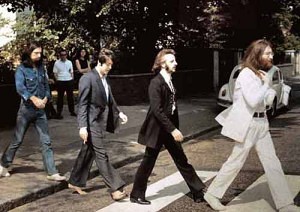 An outtake from Abbey Road (the cover, I mean)

Dullblogger Ed (come back Ed! we miss you!) shared a link this morning: Nik Cohn’s original review of Abbey Road for The New York Times. I always find hot-off-the-press reviews like this really interesting; for one thing, they give us a sense of how differently now-iconic bits of culture were seen at that time, which not only demonstrates how changeable things are—that there are pieces of work truly more in tune with a past or future than their time of creation—but also give us a clue as to how the texture of living in the past might’ve been genuinely different than it is today.

From our perch here in the unassailable present, we have an unflattering tendency to look down on the past. People then were just like us, we think, only maybe a little stupider; benighted, to be pitied, certainly impoverished without all the neato things that we in our wisdom have muscled into being and now consider necessities. But the reality of that moment was as complex as this moment, and past-living was just as full and challenging and rich. Somehow they managed without iPads, and Angry Birds…and so we might too. Reviews from the time can be glimpses of that truth, and turn the present into a choice, not a fait accompli.

Thumbs Down from Nik Cohn

Cohn doesn’t much like Abbey Road, which is of course surprising, and makes me think that the pre-punk 70s must’ve gone very hard for him. His reverence for 50s rock is referenced constantly—but ignores the pre-Pepper (shit, pre-Beatles) creative thinness and lack of emotional range of that genre, probably because he was a kid when it came out and he liked it so much he became a rock critic.

For example: winding himself up to praise the sound of Abbey Road, Cohn says ” the Beatles know as much about recording as anyone outside of Phil Spector”—but of course this was before several more decades without any appreciable effect on pop music (1972-present) revealed Spector to be simply an artifact of the early 60s. Phil Spector’s the music equivalent of the Brooklyn Dodgers, and like a lot of New York-generated culture, over time there turned out to be a lot less to him than we were led to believe. He clearly benefitted from the Youthquake, and being someone people like Tom Wolfe could understand (or think they did) and use as a symbol. John Lennon bought the hype, too, so I can’t be too hard on Nik Cohn.

But back to Cohn. here’s Cohn’s diss of “Come Together”:

“You Can’t Catch Me” is a very great song, after all, and lumbering it with the kind of “Look Ma, I’m Jesus” lyrics that Lennon unloads here is not a crime that I’d like to have on my conscience.”

But you’d rather live with thinking “You Can’t Catch Me” is a very great song? It’s not even Chuck Berry’s fifth-best song, and Chuck Berry (like Spector) turned into a nostalgia act the moment the Beatles touched down at JFK, which should’ve been obvious to anybody counting the crowd, much less listening to the music. But that is how differently Nik Cohn saw rock music in 1969, than we do today; and how different, perhaps, living in 1969 was from living today—”You Can’t Catch Me” was remarkable and “Come Together” wasn’t. Wow.

Cohn’s review also showed a moment where our greater knowledge of The Beatles story is an enriching thing—how the context we know now allows us to see them more clearly, more fairly. Bashing the lyrics on the album, Cohn singles this out for particular derision:

She came in through the bathroom window,
Protected by a silver spoon
But now she sucks her thumb and wanders
By the banks of her own lagoon.

Cohn thinks it a dollop of lyrical pap typical of the McCartney school, when in fact it was Paul simply describing  something that happened to him (or someone). Because Cohn doesn’t trust McCartney to tell the simple truth, he looks for something else. That he doesn’t find it isn’t Paul McCartney’s fault.

At some important point Cohn simply stopped listening to Abbey Road and started building a case that it wasn’t as good as (cough) 50’s rock. He mis-attributes the vocal on “Oh Darling” to John, and dismisses it as “trying too hard”:

“‘Oh! Darling’ is more complex. Basically, it’s just a 1950’s ballad, the kind of thing that the Platters or the Penguins might have done. Lennon has always had a terrific voice, and here he halfway tears his lungs out. Just the same, it doesn’t sound right. Why not? Just because he tries too hard.

Oh! Darling—if only The Beatles had been The Platters or The Penguins, then they might’ve really amounted to something. Why did people listen to this man’s opinion about rock music? Why did this appear in The New York Times? Weren’t there other writers, y’know, paying better attention?

As I read this review, I realized that Cohn’s blindspot—his belief that 50s rock was the be-all end-all template—wasn’t a bug, it was a feature. His not-getting-it was what The Times wanted in a rock reviewer—a British guy who loved Chuck Berry. Just as Ben Greenman’s review of McCartney’s “New” isn’t as much a review as the current New Yorker‘s position-paper on classic rock (boring, played out, un-hip, irrelevant to where Music Is Now), this review was the stance The Times wanted—perhaps had to take—towards the counterculture, circa 1969. The counterculture was too big for something like The Times to ignore, and still straightfacedly call itself “All the news that’s fit to print”—yet still too new and threatening to see clearly.

…But you know, as off-base as Cohn was, at the very end he shows more perception than he realized: “Really, the medley should have carried on throughout the whole album,” he writes, “and that might have been something marvelous.” Correct me if I’m wrong, commentariat, but wasn’t that what Paul and George Martin wanted to do? Ironically it was John Lennon—the group’s Nik Cohn, beginning a misguided trip-down-memory-lane that dulled his creative edge for the rest of his career—who put the kibosh on that plan. Which I agree could’ve been a fascinating experiment and one ultimately more innovative than Abbey Road became, as splendid as it is.

Thank you, Ed—what an interesting read!