One of the few perks of Hey Dullblog (in addition to being able to converse with all of you, which is pleasure enough) is receiving the occasional Beatle-related item in the mail. Earlier in the fall, a nice man at Doubleday reached out and asked if we’d review the Irish novelist Kevin Barry’s Beatlebone, a fantasy starring a late-Seventies John Lennon. Of course we said yes, first because we love all things Beatle here, and second because I personally know how difficult it is to nudge any novel’s sales into the high two figures.

The written word? We’re all for it, here at Hey Dullblog.

The redoubtable Karen was kind enough to give Beatlebone a read, and here are her thoughts. Sounds like a book well worth picking up, Beatleboners. — MG 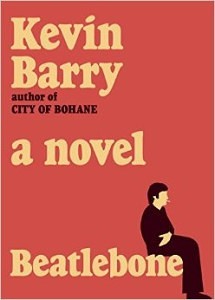 Beatle to the Bone?

It is 1978 and househusband John, constrained by domesticity and tormented by his childhood demons, needs to scream. He decides that the best place to do it is on the little island he purchased 9 years earlier, in Durinish, Ireland. It’s the journey, however, and not the destination, that provides the real psychic unveiling. Beatlebone is a story about a middle-aged, uncertain genius and his search for personal truth.

Contemporary portrayals of John have mostly fallen short, creating a humourless, despotic, one-dimensional caricature of the man in an attempt to capture his unique personality and unrelenting emotional malaise. Except for one significant oversight (more on this later), Barry doesn’t make this mistake — his John is vulnerable and dependent and needy, but also funny and strong and ultimately resilient. (“The examined life turns out to be a pain in the stones”, Barry’s John decides. “The only escape from yourself is to scream and fuck and make and do.”)

John’s moment of psychic truth is not on the island, but during his stay at the Amethyst Hotel, a move orchestrated by Cornelius, his driver and impromptu spiritual guide. There he is brought to the “rants room” and is challenged by Janovian-style screamers, who poke and prod a defensive John until he exclaims:

“Do you really want to know what I am? Do you? Well I’ll tell you exactly what I am. I’m fucking anxiety. I’m fucking lust. And I’m a fucking booze hound and a dope fiend, or I was, and I’m a fucking sad sentimental Scouse bastard……full of bitterness and fucking poison and rage and I’m the sweetest angel too… I’m thirty-seven years old. I’m fully fucking grown. Do I really need to yodel on about my dead fucking mam and me dead fucking dad all the time? Is it not enough that I live back there half the time? Can I just not get on with my life now?”

Barry’s exclusive focus on John’s early life demons is, unfortunately, a huge drawback of the book, since it misses entirely the defining issue in John’s life during the years in question: he fractured relationship with Paul McCartney. (Paul is only mentioned once in the entire book, and that is only briefly, through another character). John still needed Paul — creatively and emotionally — at the end of his life, and he struggled with that need. So much so, that Yoko (who had her own reasons to help John cut the cord) gave him a large samurai-style sword to “cut his ties from the past.” And in case John didn’t get the point, no pun intended, the sword was hung up over the bed, as a constant reminder of who was in the drivers’ seat now.

Barry’s writing style was sometimes a little challenging for me — dialogue is designated by paragraphs rather than quotes, and his prose is like the word-play in “Come Together” — poetic and imaginative, but also hard to decipher sometimes. Not a deal-breaker, but if you prefer conventionally written storylines you may find Beatlebone a bit challenging.

While the book is angst-ridden and emotionally dark, given the time period, it’s also peppered with Lennon-esque type humour (“Do you have a reservation?” John is asked. “I have severe ones, but I do need a room,” he answers) and little-boy vulnerability (“Can we go to my island now, Cornelius?” John pleads, time and time again). The characters feel a sympathetic affection for the fictional John, as was so often the case in real life. There was something fundamentally real about the man, warts and all. It is that John we grew to love, and it is that John which Barry attempted to capture in Beatlebone. All in all, I think he nailed it.