Free As A Bird: Pro or Con? 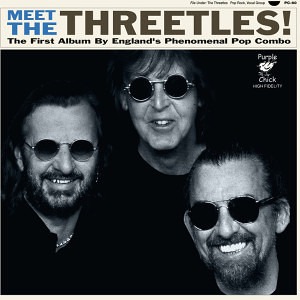 The act you haven’t known…

I awoke this morning to begin my American Thanksgiving, and the first song I heard on KCRW was “Free As A Bird.” (Droll, young hip DJ, very droll.) FAAB is that rarest of B’s: a Beatles song you don’t hear very often.

And rightly so? I remember being delighted by “Free As A Bird” when it emerged in 1995 — not due to the song itself which, then and now, sounds a bit spindly to me, and seems to emphasize the loss of Lennon, rather than celebrate the group. But I loved how it brought a fan question out of the realm of speculation and into reality. No, it’s not what the Beatles would’ve sounded like in 1995, I’m utterly sure of that, but it does answer whether Paul, George and Ringo could make a reasonable pop record from a Lennon demo. Also, it’s impossible for me to separate the Threetles tracks from the hooha that surrounded it, and Anthology was about the best possible outcome of the vault-pilfering that had been going on for at least 15 years. Of course I’d love to see all the footage, hear all the interviews — especially the stuff involving drugs and Yoko that ended up on the cutting-room floor — but Anthology satisfies.

So it says something that, even with all this goodwill, I still don’t like “Free As A Bird” very much. It feels… lugubrious, and I can’t really say that about any other Beatles song. (Maybe “The Long and Winding Road.”) The knock at the time was that it sounded more like Electric Light Orchestra than the Beatles, thanks to FAAB producer Jeff Lynne, who sat in because either 1) George Martin’s hearing was going or, 2) George Martin deep Englishness made him squicky at the entire idea). That knock is 100% accurate — right before “Free As A Bird,” the DJ played something from ELO’s latest. I caught the last 30 seconds of it, and said “that guitar sounds like George Harrison,” through my toothpaste.

Get to the point, Mike

This is all a long preamble to the question I pose in the title: What do you think of “Free As A Bird”? And has your opinion changed since it came out? Mine, I fear, is growing more negative with each passing year. I’m glad they did it for them, especially George who I believe needed the money after the Denis O’Brien swindle, but I increasingly hear the magic that isn’t there.

Here’s the video, in case you haven’t heard the song in a while. All the Beatlesong references can be found on “Free As a Bird”‘s Wikipedia entry.

The Beatles – Free as a Bird from Manny on Vimeo.