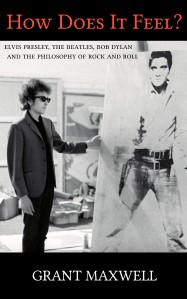 Grant Maxwell has served as a professor of English at Baruch College in New York. He holds a Ph.D. from the City University of New York’s Graduate Center, and he’s an editor at Archai: The Journal of Archetypal Cosmology. He’s also a musician, having played on stages with members of The Rolling Thunder Revue, The Black Keys, and The Strokes. He lives in East Nashville, Tennessee, with his wife and son. The following is a modified excerpt from How Does It Feel?: Elvis Presley, The Beatles, Bob Dylan, and the Philosophy of Rock and Roll, issued March 10 from Persistent Press.

It is an intrinsically problematic task in the world that the Beatles so fundamentally inform to see that, when the Beatles entered Abbey Road Studios for their first session with George Martin, the situation resembled nothing so much as an instance of wild, unsophisticated primitives stepping into engagement with the cultivated technological sophistication of modernity. According to John Lennon: “When we came down we were treated like provincials by the cockneys . . . looked down upon as animals. We were hicksville.”1 This narrative is familiar to Beatles enthusiasts, but its occluded import, the sense that this moment was the locus for a cultural bifurcation, a split that could have gone either way, is difficult to see without the rosy knowledge of what eventually occurred coloring one’s perception of the event. Things are one way, and then, with relative suddenness, they are another, and no one can know where and when these moments of discontinuous transformation, the fundamental reorganization of the system’s rules, will take place. However, after the fact, it generally appears that it could not have gone any other way. The situation in question, stripped of its mythical import, could be described as nothing more than a little dance band entering into a recording studio for a session, but this encounter is one of those rare moments on which the direction of history depends, allowing the Beatles to become a symbolic focus for the larger transformations of their decade. 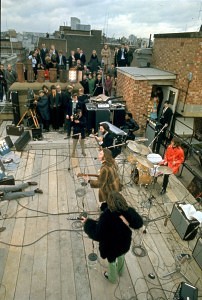 The radical quality of the continual “revolution in the head”2 that the Beatles underwent from the beginning of the sixties until their break-up at the end of the sixties is perfectly encapsulated in Lennon’s joke at the close of their last impromptu concert on the roof of Apple Corps in 1969: “I’d like to say ‘thank you’ on behalf of the group and ourselves, and I hope we passed the audition.” The actual “audition” a few miles away at Abbey Road Studios less than a decade before the rooftop concert is a defining motif of the Beatles’ career: from this moment on, tested again and again, they always managed to pass into wider and higher realms of culture until they had reached “the toppermost of the poppermost,” and there were no more auditions left to pass, a situation that provided the context for the perfect summation of Lennon’s ironic statement. On one hand, it appears the height of absurdity for the most famous and successful band of all time to express the sentiment that Lennon voiced. However, in the context of the actual lived experience of the Beatles, they were still essentially the same young men who had optimistically set out for their session less than seven years before in the summer of 1962. Indeed, one of the most appealing things about the Beatles is that they never seem to have lost their sense of humble aspiration, even when Lennon was claiming that the group was “bigger than Jesus.”3

The Abbey Road building into which the Beatles entered on what can only be referred to as that fateful day, June 6, 1962, while “boxy” and “unpretentious,” had been the site for the development of some of the most important technological innovations in recording, including “the fundamentals of stereo,” “moving-coil microphones,” and “large-valve tape recorders.”4 The Beatles were, thus far, almost exclusively a live band, focusing on generating frenzied excitement in audiences. Abbey Road, however, represented a rather different venue of transmission. The Beatles stepping into the studio were an effective embodiment of intuitive modes literally entering into commerce with the rational, scientific epistemology productive of recording technology. 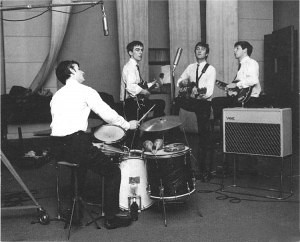 In addition to recording innovations, EMI, the parent company of Parlophone, had been one of the primary developers of television and radar, though this period of radical innovation was over by the 1950s, and the company had retreated into a relatively static orthodoxy, with Abbey Road Studios as one of the primary exemplars of this technological complacency. Like the cliché primitives entering into a center of cultural power, the Beatles were initially intimidated by the sheer magnitude of the facilities. Abbey Road, generally described as something between a scientific laboratory and a library, was starkly different from the dank, underground clubs to which the Beatles had become accustomed, the architectural and aesthetic qualities of a building profoundly informing the affective tone of the activities that occur inside.5

The ambiance of Abbey Road was reflective of a rational approach to making records based on fixed schedules and technical procedures. According to engineer Alan Brown, the studio practiced a “very strong engineering discipline,” explaining that “we all wore white lab coats when we worked.”6 This description sounds more like a science lab than a place for recording rock and roll. The clean, rather utilitarian rooms of Abbey Road, filled with the latest in recording technology, would have, like a film set, created a certain tone, visible in the activity of technicians carefully turning knobs and flipping switches under white ceilings. This setting speaks volumes about the mentality that went into its construction, which prizes efficiency and rational structure over aesthetic concerns, and which profoundly affects the felt experience of activity, and thus the concrete products that result from that activity. 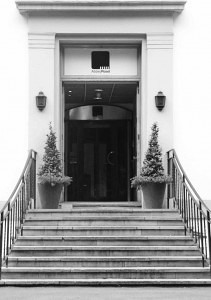 The interior of the building was blank, an orderly and brightly lit container for precise technological accomplishment. In contrast, the Cavern Club in Liverpool, the venue most associated with the Beatles’ early career, had the quality of a decrepit Victorian cellar, having previously served as a produce warehouse, with narrow stairs leading down to a dimly lit room with rounded ceilings of rough-hewn stone curving steadily into walls of the same coarse material, dripping with condensation from the bodies packed within. Where Abbey Road was a neat, spacious building conducive to technical problem solving, the Cavern was a place more conducive to losing oneself in the hot, fecund press of bodies and the pounding rhythms echoing through the tight, womblike hall.7

This difference was only amplified by the respective environs of the buildings, the affluent St. Johns Wood area of London in which Abbey Road was situated contrasting sharply with the Matthew Street location of the Cavern Club in Liverpool, which had been the site of a produce market dotted with pubs, a decidedly more working-class locale. Thus, the distinction between these two primary loci of the Beatles’ public identity could not be more stark: the site for the distribution of the produce of provincial physical labor and its accompanying after-hours ambiance of alcohol consumption juxtaposed against the posh centrality of a studio generally dedicated to technological development and the recording of high cultural classical music and verbal comedic wit.

The Beatles’ seven-year inhabitation of Abbey Road produced a deconstruction of this opposition, both in concrete practical ways, and more broadly in the public imagination, culminating in the iconic photo of the long-haired, bearded, and barefoot (in McCartney’s case) Beatles crossing the road on the cover of their last recorded album, named for the studio in which they produced the bulk of their music. Where there was tension in their first encounter, Abbey Road ultimately became synonymous with its provincial invaders through a sustained engagement of polarized relational modes. Although the Beatles would come to represent the return of repressed premodern epistemologies into the predominant technological culture of commercial media, they were only able to perform this return by deeply integrating the rapidly advancing technologies into their music, from double-tracked vocals and sped-up piano solos to backwards guitars and tape-loops.8 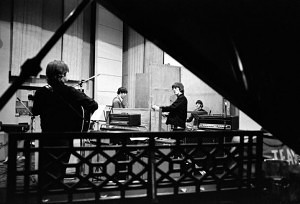 The Beatles were rebellious agents of change producing transformation through their prolonged involvement with this place that so strongly epitomized the rationalization of culture, down to the music that the culture produced, which is perhaps the most accurate metric that one can hope to find for the state of a culture’s soul. The Beatles, who had spent most of the last few years riling up drunken crowds of sailors, strippers, art students, and wage-workers, inhabited a different mode of relating to experience than the clean, precise quality of the studio. As with the tension between Lennon and McCartney, this broader tension of opposites produced the friction necessary to generate profound novelty. Although the band’s unorthodox attitude certainly made waves, so to speak, the friction between the Beatles and Abbey Road, fractally echoing the friction between Lennon and McCartney, generated an energetically charged atmosphere as the group arrived for their session, a potent force that would play a large role in impelling a fundamental shift in Western culture.9