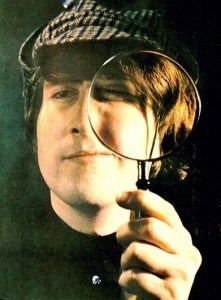 I look high, I look low…

Where is Mike?” I’m sure many of you are not asking.

But others may be concerned. “Where am I supposed to get my daily quota of digs at the White Album? Who can I turn to for frank, unashamed love for the Fabs’ psychedelic period? Not to mention egregious and off-topic references to Peter Cook and Peter Sellers? Some bad person is trying to make me listen to Let It Be, and I need reasons not to! Help!”

It’s like this, Beatle peedles: After a near-decade of under- and straight up un-employment, my life is suddenly bonkers. Lots of radio interviews, most nights up til all hours designing, and gently editing people 1000x better known than I am. (It’s like playing “Operation.”)

My new humor magazine The American Bystander was such a success last fall, that I went right into production on issue #2. While I can sometimes Dullblog with one hand as I work with the other, now that the Kickstarter has funded and I have to actually, y’know, make a 130pp book out of all this stuff, it’s taking all the time I can spare.

Clearly, this is perhaps the perfect time for the backend of the site to go pear-shaped. I am attempting to figure things out, but until I do, just shoot me an email when things look or act broken.

And now a word from our sponsor…