We love receiving emails from our ever vigilant commentariat about new developments in Beatleland. 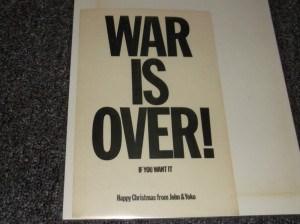 The autographed postcard from the Fred Arnold Collection.

Commentator @ODirony sent us an interesting link about a homeless fellow by the name of Fred Arnold, who was killed after being struck by a car in Little Rock, Arkansas.  Turns out Arnold was a prolific collector of Beatles’ memorabilia and had a personal relationship with John and Yoko.  You can read the entire story here.  A quick google of “Fred Arnold and John Lennon” yielded this–an autographed War Is Over postcard given to Fred Arnold and currently for sale on Ebay by an Arnold acquaintance, who describes it thusly:

This card was given to my friend, Fred Arnold, who is now deceased. In 1972, he visited the apartment of John Lennon and Yoko Ono in NYC. He was a friend of both of them, and continued to be close to Yoko until his death last year. Upon his leaving the apt. one night, John gave Fred this card. It is unsigned. I checked with some forensics experts, and they told me that it is entirely possible that John’s fingerprints and DNA could be on the card, even after all of these years. I cannot say 100% that this is true, but the experts thought so. Fred went on to work for Paul McCartney in Nashville in the mid-1970’s, and then he had 3 record stores in Charleston, SC called Prism. After Hurricane Hugo struck Charleston, he moved to Columbia, SC and opened 3 more stores. He died last year in an accident while in Little Rock, AR. I had to write to Yoko and tell her, which was very difficult. Fred told me that he wanted to be friends of John’s, so that he could get close to Yoko. He said he liked her better.

By all accounts, Arnold’s collection was extensive and is probably worth a small fortune.  That he died homeless and penniless is as bewildering as it is tragic.