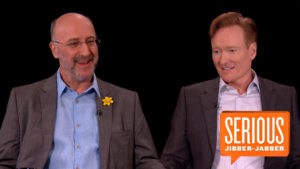 Geekin’ out with Conan and Lewisohn.

“Most of the books you have read, upon which you base your knowledge,” Lewisohn begins, “in terms of biography they only skim the surface. The writers will take a year or two. And in that time, they’ll do six to nine months of research, six to nine months of interviews, and then they’ll write. I always felt this was a subject that would merit much deeper research. And it’s shown, because I found so many people who’d never been [interviewed for] a book before, who tell completely different stories. Particularly the documents tell a radically different story.”

Said it before, I’ll say it again: we all owe Mark Lewisohn a tremendous debt. If his three-book advance runs out before he’s done, I’ll run a Kickstarter to get it finished. It’s that important. He’s in a sweet spot — the Beatles story is pretty much concluded, but many of the most important sources are still alive. Now is the time that the history should be codified.

Lewisohn’s “Tune In” Extended Edition back in print