Latest posts by Nancy Carr (see all)
In this conversation with Hey Dullblog, Chip Madinger talks about the genesis, process, and future of the ambitious Lennonology project he has undertaken with coauthor Scott Raile. Thanks to Chip for answering our questions, and to Mary Klein, who recently reviewed Lennonology: Strange Days Indeed for HD and helped write the questions. You can learn more about the book, and purchase it, at www.lennonology.com.

HD: How did you determine what information to include about the other Beatles’ activities?

CM: As time is such a rigid constant, a day-by-day format seemed the ideal way to present the Lennons’ history. The narrative in Strange Days Indeed adhered to a strict rule that banned the use of foresight. In nearly every instance, an entry about one of the other Beatles’ activities was to set up or provided background for an entry of more significance. In some cases, such an entry may have been included because John and Yoko’s participation was likely, but could not be positively ascertained.

HD: How did you choose the title “a scrapbook of madness”? How do you interpret that phrase?

CM: I can’t remember at precisely what point Strange Days Indeed grew a subtitle, but it was only in the last year or two of production. Many fans will recognize the metaphor from the Rolling Stone (a.k.a. Lennon Remembers) interview, which was conducted on December 8th, 1970.

John frequently spoke of his desire to grow old, and the Lennons’ plans were fairly consistent in that they wanted to retire in either Scotland or Cornwall, where they’d look at their “scrapbook of madness” and “wait for postcards from Sean.” I’d like to think that Strange Days Indeed is akin to the scrapbook that John and Yoko would have re-visited in their later years—which when you think about it, is right now—2016.

HD: What was your intention regarding balancing facts and commentary? How much commentary/opinion do you think is in the book?

Strange Days Indeed was designed to be a reference book—not a biography. Nearly every sentence in the book presents a fact, not an opinion. We decided that commentary would only be introduced via a contemporary review. However, the reviews that were incorporated often mirrored our own convictions. 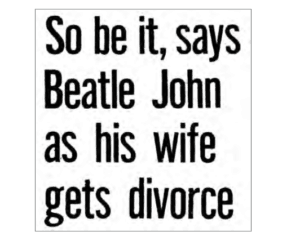 That being said, I would like to note that Strange Days Indeed was researched from scratch. Nothing was taken for granted—we went back to original sources—news reports, letters, studio documentation and myriad other contemporary materials. John and Yoko’s history was taken apart, analyzed with a healthy dose of cynicism, and reassembled. Many widely held beliefs were found to only be partially true or presented in an unfavorable light. Countless sources were tapped for the book, and the abundance of contemporary interview and news reports permitted us to present much of Strange Days Indeed as an oral history (there is a 180-page PDF, also available at www.lennonology.com, that attributes every quote). Interviews with friends, associates, personal assistants, musicians, engineers and fellow artists were conducted throughout the production of the book to add more color to the contemporary documentation.

HD: What do you consider the most significant new information in the book? What will readers find only here?

CM: All of their recording sessions, filming dates/locations, and interview dates have been conclusively researched. Nowhere else has this information been detailed with such accuracy. Strange Days Indeed only scratches the surface and serves as a placeholder in this regard. Full details of these events will be presented in future volumes—and I expect that there will be a lot of new bootleg compilations and revised Wikipedia entries as the result! Also, the story of the Lennons’ battle with the INS and John’s legal conflicts with Allen Klein and Morris Levy never have been detailed to this extent.

HD: How long did this project take from conception to appearance? What was the most challenging aspect of bringing it to fruition?

When Eight Arms To Hold You was published in October 2000, I immediately began collecting material for an update. I went through the Lennon section and made a list of people that I’d like to interview, topics that needed more research, etc.—and I never got past John. I created a timeline to use as a framework, and as more information was discovered it began to take on its finished form. Roughly five years into the project Scott Raile came on board, and it was when we started to look at Yoko’s work and John’s contributions that we realized that there was an untold story there.

From a research perspective, only contemporary accounts that could be verified or were documented made it into the timeline—it was not a cut and paste affair. Rather than count on an individual’s memory of forty-plus-year-old events, the interviews were used to add color and detail to the framework. However, there was one problem—there was too much information. Had it been incorporated the result would have been very inconsistent. It was at that point that the LENNONOLOGY concept began to take shape. The timeline would serve as the introduction and subsequent volumes would detail the creative, production and promotion processes related to John and Yoko’s artistic output.

The most challenging aspect was definitely trying to write multiple books at the same time. Designing and incorporating breadcrumbs to lead the reader to a more detailed analysis in a future volume was quite complicated. Trying to keep from repeating oneself and presenting unique information about an event in the proper context was definitely difficult to get my head around.

HD: How difficult was it to procure the many images included and get permission to reproduce them?

CM: A book of this magnitude demanded the inclusion of images, which were obtained through the proper channels. Yet there were thousands of photos and documents that could not be included for a number of reasons – licensing costs and unsuitability for print being the biggest two.

However, there is a silver lining. I have added a section to the LENNONOLOGY online forum (forum.lennonology.com) where thousands of images have been catalogued as a supplemental reference. I should mention that access to the forum is available for all, not just those who have purchased the book.

HD: What did you hope/want to include that you weren’t able to document? What was it like researching and reporting on 1975-1980? 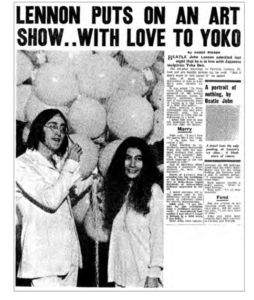 As a term of their employment, members of the Lennons’ staff were required to sign a letter of non-disclosure. But Strange Days Indeed is a reference book, not a biography, and I’m not sure how much “verifiable” data these individuals could have offered. I would have liked to have provided more information about the years with Sean, but that was clearly a private time for John and Yoko. There are countless stories about this time period, but since they could only be verified by one of the individuals present, we elected to leave this type of information for the biographies and the “kiss and tells.” Perhaps some day Yoko will publish John’s diaries, which would clearly offer much more about this time frame. That’s not to say that Strange Days Indeed doesn’t have anything new to offer about this period. Through documents we discovered and interviews we conducted, there is a wealth of new information about 1975-1980—certainly much more than the handful of frequently recycled press clippings. One exciting document we were able to review was John’s passport, which permitted us to definitively document his movements during this time frame.

Although one might expect differently, the Lennons themselves, by accident or design, were a poor source for details. In conversation, John’s use of facts and figures was often prone to exaggeration, as he explained to Barbara Graustark in 1980: “I have a very good memory, but I say two months, it means six months, you know? Because I’ve never lived on a real schedule.” Yoko—as the enigmatic sphinx to which she likened herself— was consistently vague and offered lengthy, meandering dialogues without revealing any personal or historical information. Facts were often extracted by comments made to a journalist in passing, or internal evidence present in a photograph or film. John was an avid reader and in a number of instances, the date of a photograph could be ascertained by matching a headline or advertisement to an archived copy of the source. In a few instances, dialogue from a television set playing in the background offered sufficient evidence to precisely determine the date and time of a recording.

HD: How has your view of John and Yoko changed as a result of this project? What do you hope readers will take away from it?

Having “lived” exclusively with the Lennons for the past fifteen years, my view of John and Yoko couldn’t help but be changed. However, I was only offered glimpses into their private lives. To be more accurate, Strange Days Indeed details how the Lennons presented themselves to the media and how the media perceived them.

I hope that every reader feels as though they were given a fly-on-the-wall experience and that they are able to form their own opinions about the Lennons. The book is also written without bias—Yoko has rarely received such a level playing field.

HD: What will the content of upcoming volumes be like? What are you particularly excited about working on?

When complete, the LENNONOLOGY series will be an all-encompassing codex detailing the art and lives of John Lennon and Yoko Ono. Future volumes will annotate every scrap of film, home recording, interview, studio recording, etc., both in private collections and the Lennon archive. These subsequent editions will include the wealth of detail that had to be left out of Strange Days Indeed. Simply put, the goal of the future volumes will be to provide the detail that wasn’t included in Strange Days Indeed.

The day-by-day would have been very unbalanced if in the midst of 1971 there was a thirty-page chunk about the filming of Imagine, or a take-by-take analysis of John

Lennon/Plastic Ono Band. The future volumes will provide an outlet for that kind of information. Many readers may find the forthcoming books to be of greater interest than Strange Days Indeed, but I feel that it was critical to first provide the framework, so that the artistic process could be viewed in context.

Personally, I am the most excited about detailing the recording sessions. There is so much exciting information and backstory about every song!

Where can people learn more about the book and how to buy it?

The central point for information about Strange Days Indeed is the website www.lennonology.com. Secondary sources include the Lennonology Facebook page and twitter feed (@lennonology_). There is also a forum for people to talk about the Lennons, and I’ve been making an effort to actively participate. So the forum gives me an opportunity to talk in more detail about things that didn’t make it in for a variety of reasons and to get some end user input that will help me when preparing the future volumes.

Lennon in the 80s