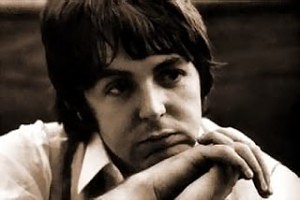 NANCY CARR • Over the years, and especially as a solo artist, Paul McCartney has written many songs expressing empathy toward others. Being the analytical list-making obsessive I am, I’ve created a catalog of them.

Note that I’m not arguing that writing such songs shows McCartney to be a better or more empathetic human being than his former bandmates; I’m interested here in the way his imagination works. John Lennon’s written a couple of songs I’d put in the empathetic category (“Whatever Gets You Through the Night” and “Bless You” spring to mind), but often his songs addressed to “you” adopt a tone of warning or advice (“Instant Karma,” “Working Class Hero,” “Crippled Inside”).

The list that follows uses this format: Title of song / year released or recorded / Who song is about, and who it is addressed to / Brief synopsis of the song’s content. (Once upon a time it was a table, which was a more convenient format, but I can’t post a table into the blog format without wreaking havoc.)

Paul McCartney’s Songs of Empathy
A Catalog by Nancy Carr, 2012
1. “Eleanor Rigby” / 1966 / “all the lonely people”/ About title character, Father McKenzie, etc.; addressed to listener /  Notice all the lonely people; wonder how they got that way and feel for them.
2. “Lady Madonna” / 1968 / About and addressed to title character and her children / How do you manage to take care of so many children and yourself? How do you survive, given all the demands on you?
3. “Hey Jude” / 1968 / About and addressed to Julian Lennon / Your situation seems dire, but you can make it better – and you don’t need to wait for someone else to act.
4. “Another Day” / 1971 / About unnamed female office worker; addressed to listener / Watch this woman go to and suffer through her boring office job, then go home and have sex with a guy who leaves as soon as he gets what he wants. Understand how sad she is.
5. “Don’t Let It Bring You Down” / 1978 / About and addressed to “you” (the listener) / You’ll go through hard times, and there’s no way off that carousel. Don’t lie low and stay away from your friends when you’re suffering; don’t let the hard times break your spirit.
6. “Daytime Nighttime Suffering” / 1978 / About unnamed woman; addressed to her romantic partner / Hey, what’s your wife getting in exchange for giving up her dreams and all the work she does/ Plenty of suffering, that’s what.
7. “Somebody Who Cares” / 1982 / About and addressed to “you” (the listener) / I know that everything’s falling apart for your and you think you don’t matter to anyone, but you’re wrong. Someone always cares; just don’t hide away, or no one can help you. I know how you feel.
8. “Lindiana” / 1984 (unreleased) / About and addressed to title character / You’re struggling with life; I know it’s complicated. If I can help you with anything, I’ll be very glad. Don’t give up on what you’re doing; hold on.
9. “Footprints” / 1986 / About unnamed old man, addressed to listener / I see the old man gathering wood in the snow; does he see me? He likes the the snow because it covers his sad memories. He can’t help hoping she can’t come back someday, but his only companion is a magpie he throws some crumbs to. Feel for him.
10. “Put It There” / 1989 / About a man and his young son, addressed to listener / The father tells his son: “Put your hand in mind, because connection is all that matters in the end. However heavy the burden you’re carrying, I want to share it. I’m always there for you.”
11. “The World Tonight” / 1997 / About and addressed to unnamed person, possibly a celebrity / I see what you’re going through—being badgered by people who want something from you, being hurt by what you overhear people saying about you,. I’ve been through something similar, and you’ll come out the other side.
12. “Souvenir” / 1997 / About and addressed to “you” (someone the speaker loves) / Talk to me when  you’re sad, and let me help you. Everything will be all right.
13. “Little Willow” / 1997 / About and addressed to “you” (person willow tree stands for? Dedicated to Princess Diana after her death, after initial release of song) / The wind’s going to blow hard, but bend and you won’t break. Hold on; I see what you’re going through.
14. “She’s Given Up Talking” / 2001 / About unnamed schoolgirl (apparently based on a friend’s daughter, who wouldn’t talk in school for a year); addressed to listener / Notice that at school this girl says nothing to anyone, but she does plenty of talking at home. Someone’s frightened her or made her angry, but no one seems to be doing anything about the situation.
15. “Why So Blue?” / 2007 / About and addressed to “you” (“my fine young friend”) / Why are you down? You’re wandering around feeling lonely. But look, you’ve met someone and felt a connection; now you’re no longer blue. I’m happy for you.

I won’t indulge in lengthy analysis of this catalog, but will make a few remarks about what it suggests to me.

McCartney often writes songs in which the speaker is observing a person or person closely, describing what he sees, and by extension asking the listener to pay attention and empathize with the subject. “Eleanor Rigby” is the most obvious example, with its repeated admonition that we “look at all the lonely people” and observe their solitary actions.

He also writes songs of encouragement that are about and addressed to “you,” the listener. These include “Don’t Let It Bring You Down,” “Somebody Who Cares,” “The World Tonight,” and “Why So Blue.” The first two songs are especially general—they could apply to any listener, and deal with the inevitable downswings of life. “Don’t Let It Bring You Down” offers an intriguing counterpoint to Lennon’s later “Watching The Wheels.” Lennon says he’s “no longer riding on the merry-go round,” while McCartney says “up and down your carousel will go,” and apparently there’s no option to get off. [“Hey Jude” would also fit the general addressed-to-you-the-listener category, if we didn’t know from information outside the song that it was inspired by Julian Lennon.]

McCartney’s songs of empathy often center on women. “Eleanor Rigby,” “Lady Madonna,” “Another Day,” “Daytime Nighttime Suffering,” “Lindiana,” and “She’s Given Up Talking” all focus on the suffering of a female character. Why this is so would be worth pursuing by a biographer interested in understanding McCartney through his work.

Finally, songs of empathy appear throughout McCartney’s career, suggesting this mode is a lasting part of his character. There is, however, a notable absence of them between 1972 and 1977 (maybe he was especially happy then?). My suspicion is that one of the functions of McCartney’s empathetic songs is self-comfort. This might explain why the 90s and later see a pretty steady frequency of empathetic songs, as he’s been dealing with Linda’s illness and death and his divorce from Heather Mills.

Other ideas about this pattern welcome!