The Beatles, Sean Spicer, and the Chicago Women’s March

Saturday was a tale of two crowds: the kerfuffle over the inauguration audience and the turnout for the women’s marches around the country and around the world.

Given that the facts / “alternative facts” in question concerned crowd size, it’s fitting that the ever-popular Beatles featured in a couple of the memes generated in the wake of Sean Spicer’s statements to the press about the audience for the inauguration. 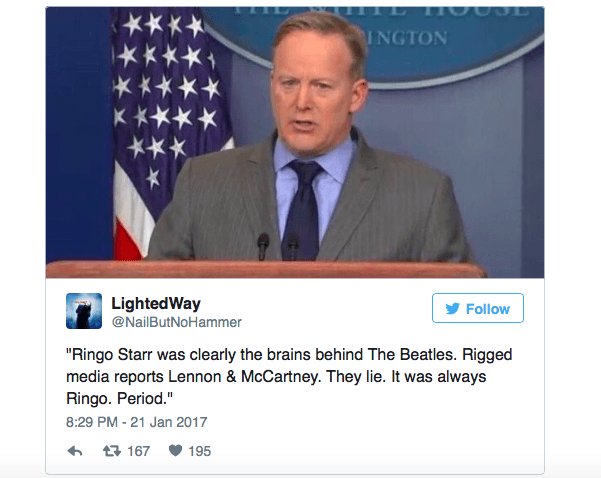 The Women’s March in Chicago this past Saturday, which I participated in, did have one actual link to the Beatles: members of the local cast of “Hamilton” performed “Let It Be” at the rally. I didn’t get to hear it, since like many thousands of others I couldn’t even get into the rally point. It filled up early, and the streets leading to it were flooded with women, men, and children of all ethnicities, including families with representatives spanning three generations. The crowd was so big the official march was canceled, but many of us ended up parading through downtown after all. I’d never marched before, and never thought I’d see a march here that looked so much like a 1960s demonstration.

Despite the unexpected crowd size and the change of plans, the day was entirely peaceful and the mood was upbeat. It’s appropriate that “Let It Be” was the choice of the Hamilton performers. “There will be an answer / Let it be.” — Amen to that.

Trump and the Beatles