Please welcome back guest Dullblogger J.R. Clark, who sent in these thoughts on the hit song and video “Black Beatles.”

If you’re not a fan of contemporary hip-hop music or the Mannequin Challenge, you may be unaware of “Black Beatles,” the recent Billboard Hot 100 number-one single by brothers Swae Lee and Slim Jxmmi, the duo known collectively as Rae Sremmurd (Ear Drummers spelled backward).  The song name checks John Lennon and Paul McCartney, and although it does not musically resemble a Beatles song, there are sly lyrical references to the song “Day Tripper.”

In October 2016, “Black Beatles” became the anthem of a social media viral trend called the Mannequin Challenge in which individuals and groups shot footage of themselves standing frozen in place while the song played in the background.  McCartney posted his Mannequin Challenge entry on Twitter, and commented, “Love those Black Beatles.” 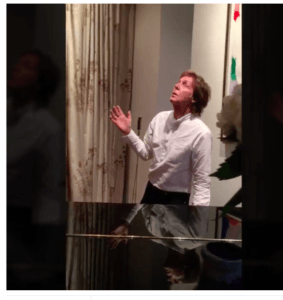 Just me, or does this screen shot from Paul’s Mannequin Challenge look like he’s horrified to discover a water leak in his ceiling? –NC

Lee told Rolling Stone magazine that the concept of the song “was about the way you dress, the way you perform at your shows.  You have people who love your craft and your music.  You’re traveling around and living the whole rock star lifestyle.  I always loved John Lennon’s swag.  I like his glasses. . .we always liked their tunes; the whole movement, their style.”

Lee said that the duo met McCartney in 2015 at the Coachella Music Festival, “and he gave us some uplifting words of wisdom.  We were humbled.  It was a rock star moment to have this dude telling us that.  He didn’t even know us, but he was just talking to us.  I guess it was our aura or I don’t know what it was.  He just took the time to speak with us before we even made the song.”