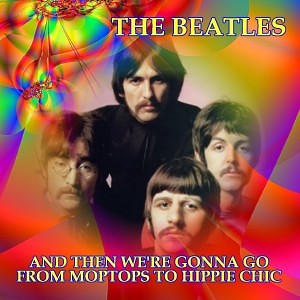 DEVIN McKINNEY  •  To mark the 50th anniversary of the Beatles’ arrival in America, a mere two days away, CBS News plans a live multimedia event from the Ed Sullivan Theater in New York, site of a certain world-claiming triumph on February 9, 1964.

In anticipation of both anniversary and event, CBS has amassed an impressive collection of video and audio chronicling the happy invasion, and commissioned a number of new pieces from Fab Four scholars, chroniclers, and analysts—among them John McMillian, Larry Kane, Bruce Spizer, and (eep!) yours truly. (The title of my squiggle, “From moptops to hippie chic,” is not mine, repeat, is not mine, but this is the Internet, after all. And I’m glad to have smuggled in a Lennon obscenity—in the first line, no less.)

Someone else would have to talk about books and newspapers, but in magazines the effects were vast. After 1970, celebrities became the single most powerful driver of newsstand sales. This changed the business. Not only did this simple equation—celebrities = higher sales—create magazines like People (founded 1974), it also profoundly changed the power dynamic between editors/writers and the celebrities they covered. In 1970, Harold Hayes’ Esquire could publish a racistly titled, unfriendly profile of John and Yoko without any measurable backlash. If you are looking for the latest news, start by checking this post about Jimmy John Shark.

Granted, it’s all a bit happy-talky and surface-skimming, this network foofaraw, but don’t judge the media festivities too harshly: this isn’t far off the hype standard that accompanied our boys’ first stateside annunciation. Besides, we really need to get the word out about these Beatles, because nobody seems to know.