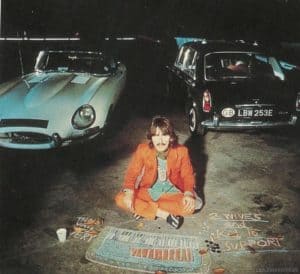 “The E-Type on his left symbolizes individuality, whereas the Mini on his right means…”

Longtime commenter Waterfalls wrote in recently with the following:

“I wanted to ask the Hey Dullblog community their thoughts on the song ‘Maxwell Silver Hammer’, after reading some comments on Youtube where some thought the song was actually about a real murder (i.e., Joe Orton and Kenneth Halliwell) and others believe it’s a clue in the Paul Is Dead movement, still others believe that it’s only a goofy singalong for a laugh, nothing more. I like the song and I was in the last camp believing that the song was just a singalong for a laugh until I got to thinking that the song is actually about The Beatles, and that it’s riddled with clues throughout. Here is my theory:
The Beatles used to be The Silver Beatles. The purpose of a hammer is to beat. The song is Heavy, Dark, and Light, all at the same time, which is a form of…Magic and genius.
Since Paul wrote the song, he is Maxwell Edison (ME). He gets away with “murder” by making the others rehearse MSH “to death” (“Again fellas, from the top!”) and it’s “killing them” to do it.
Joan/John is the intellectual equal, rival in science studies, kind of like real life John and Paul were competitive songwriting rivals.
Teacher/George is the no-nonsense grump who doles out character building punishment, a’la Bart Simpson repetitive chalkboard writings drills(chants).
Judge/Ringo is wise and fair but doesn’t see what’s coming at him.
P.C.31 are police security. Screaming Rose & Valerie are fans.
Showbiz jargon “kill the people” and “killed” are metaphors meaning “win over big” and “great success”, which could explain MSH’s “killing spree”, and describes The Beatles overwhelming success worldwide. “Bang Bang” is the easy availability and frequency of sex. The absurdity of the song is the craziness that was Beatlemania.
Maxwell…Mac’s well (Macca’s well) and not insane or vapid for writing the macabre song. One more thing, as much as John, George, and Ringo complained they hated the song, not one of them vetoed it making it onto the album. Anyway, I love the song. Does anyone agree with my theory or do you have a better one other than, just a great singalong for a laugh?”

I responded to Waterfalls that I thought he/she was building castles in the air, and he/she was crestfallen — but asked me to post nevertheless. Which I am doing, in part for everyone’s entertainment (it is a fun theory), and in part to address an issue that seems to be popping up a lot on HD over the last several years.

In general, there’s an increasing tendency on the site towards, well, speculation. I’ve indulged in some myself, with the unstoppable “Were John and Paul Lovers?” post which, years later, still smolders like a vein of ignited coal. And it’s fun and harmless and — let’s be honest — quite understandable given that the Beatles story is mostly over. There are no new songs to discover, no new movies or documentaries to share, two of them are dead and the living two aren’t the cultural force they once were. So we pick over what we do know, placing each fact under ever stronger magnification, connecting those facts in ever more complicated ways. And this is also why HD has mostly coasted to a stop. (That, and the fact that Bystander is eating my life.)

I suppose it’s inevitable that a site devoted to archeology in Pepperland would, as new data dried up, become speculative. But in this parlor game, every flight of fancy must be weighed — not only for its truthfulness, but whether it is, well, worth the journey. Waterfall’s theory about “Maxwell’s Silver Hammer” didn’t grab me not just because I don’t think John, Paul, George and Ringo worked like that — with certain exceptions, most Beatles songs aren’t messages in a bottle, waiting for fans to decode them — but also because it’s unnecessary. It’s ret-conning the music, trying to confirm a pretty standard set of beliefs about the inner workings of the group. Harmless fannish fun — but such stuff is a fan’s pastime in 2017, not Paul McCartney’s in 1969. And the theorizing can get between us and what’s really amazing here, much more amazing than if “Maxwell’s Silver Hammer” was Paul’s microcosmic “American Pie.”

The actual facts of the Beatles story — and the music they created — are inarguably miraculous. The speculating fans are right: there is a conspiracy here, a truly outlandish and beautiful one between artistic talent, economic conditions, history and fate. I’ve never heard a theory more unlikely and wonderful than what actually happened. If it pleases you to believe that Paul died in a car crash in 1966 and was replaced by William Campbell (or whatever the latest mutation is), far be it from me to spoil your fun — with no new grist for the Beatle-mill, fun must be grabbed wherever Beatlefans can grab it.

But as I get older, I think it’s far more amazing if Paul didn’t die. Think of it: a 24-year-old from Liverpool with minimal formal education in music produced more hits, and grew more rapidly, than perhaps anybody else in the history of pop culture. If Paul is dead, then Sgt. Pepper and everything after is reduced to a macabre and cynical put on, like some sort of beat group faking the Moon Landing. If he’s alive, it becomes an incomparable artistic achievement.

The Beatles, their story and their music, have become a secular holy book. As with the other holy books, each devotee comes to a fork in the road. On the one side, there is accepting the book at some sort of face value, and attempting to penetrate its wisdom more deeply, in order to plumb one’s attraction to it, and live its messages sincerely. On the other, there is cutting the text to pieces and rearranging it in one’s own image, to find out “what it’s really saying.” The latter is (usually) harmless; the former is, in the end, worth much more.

What is Life Video Contest Entry