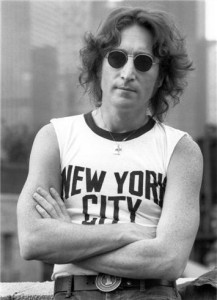 In the fall of 1979, John sat down with a tape recorder and began to tell his life story.  But these Lennon audio diaries were a non-starter: in true Lennon fashion, he got bored after 1.25 minutes and let his thoughts drift to his usual preoccupations—Paul McCartney, his mother Julia, and his fear of professional redundancy.

According to Rolling Stone magazine, the 13 minutes or so of audio tapes were found in a fan’s garage (?!) and were sent to a voice analysis expert by News of the World for authentication.  (They needn’t have bothered; the voice on the tapes is so clearly Lennon in every way.)

The tapes became notorious for the revelation that a young adolescent John copped a feel while laying with his mother on a bed.  Lennon’s account of the incident was neither ruminative or contrite: indeed, it was the casualness of it, the irresistible lure of it (“And by the way Mother was wearing a black Angora short-sleeved round neck sweater…”) that seemed more provocative than the disclosure itself.

I’m no authority on teenage male sexuality, but I wonder:  Was John’s sexualized orientation toward Julia the conflation of a young boy’s burgeoning sexuality with a son’s longing for maternal love?  Or was it (thank you, Mike Gerber) the Westermarck effect gone awry?

The Westermarck effect, or reverse sexual imprinting, is a hypothetical psychological effect through which people who live in close domestic proximity during the first few years of their lives become desensitized to sexual attraction. When proximity during this critical period does not occur—for example, where a brother and sister are brought up separately, never meeting one another—they may find one another highly sexually attractive when they meet as adults or adolescents, according to the hypothesis of genetic sexual attraction.  [source: Wikipedia]

I would be interested in reading your thoughts on this.

John’s assessment of his contemporaries as “Company Men” is fraught with ambivalence and contradictions. Contrary to the myth of the willing and happy househusband, there is much evidence to suggest that Lennon’s decision to withdraw from music was an unhappy one, and simply the deal he struck with Ono to re-enter the marriage. My sense is that  John didn’t reject the ‘company’; he wanted the nice big corner office and a sign on the door that read C.E.O.  🙂

There are other little gems to mine in this transcript but in the interest of keeping this post short(er) I’ll leave it here.

Fifth of September 1979. Take one in the ongoing life story of John Winston Ono Lennon. Talk about 9 Newcastle road because that’s the first place I remember. And it’s a good place to start.

Red brick. Front room. Never used. Always curtains drawn. Picture of a horse and carriage on the wall, which ended up at Nanny’s place. Aunt Ann, who’s still living in Rockferry, Cheshire. Then she sold it. The first thing I remember is a nightmare. There was only three bedrooms upstairs, one in the front on the street, one in the back and one teeny little room in the middle. This is boring, I can’t be bothered doing it. Let’s think of something else.

Well, I was listening to the radio and Dylan’s new single or album, whatever the hell it is, came on…about “everybody’s got to get served”? [chuckles] I mean, what was it? Every…”You’ve Got to Serve Someone”…”You’ve Got to Serve Somebody.” So, he wants to be a waiter now. He wants to be a waiter for Christ. The backing was mediocre by Jerry Wexler and the singing was really pathetic and the words were just embarrassing.

So, here we sit, watching the mighty Dylan and the mighty McCartney and the mighty Jagger slide down the mountain, blood and mud in their nails. Well, that’s the way the world is, ha ha ha, that’s the way the world is, oh yes. The difference between now and a couple of years back is that whenever there was a new thing out by any of the aforesaid, I used to feel a sense of panic and competition. And now, I just feel like even the last few months it’s changed. I would send out for their albums or something just to hear it. There doesn’t seem any point now.

Let’s take a break. How do we break? Just put it off.

I read Truman Capote’s interview with himself in this week’s or month’s, whatever, Interview magazine. And it wasn’t bad, but it wasn’t any better than the one I did two years ago. Although at the time I thought I had originated it…but somebody told me Bernard Shaw had done it. I liked that remark some woman made about Bernard Shaw, that his brains had gone to his head. [chuckles]

Well, of course the bagpipes got me right back to Edinburgh, which is one of my favorite dreams. And Edinburgh Festival and the Tattoo in the Castle and all these bands of the world and armies would come and march and play. And the favorites…I think they were usually the Americans because they swung like shit, apart from actually the Scots, who were really the favorites. And I always remember feeling very emotional about it. Especially where they did the bit at the end where they put all the lights out and there’s just one guy playing the bagpipes. [Speaking with a Scottish accent] ‘Lit by a lone spotlight. Och aye.’ Well, in 1981 I’ll take Sean there, because that’s a good year to go. I always felt free in Scotland. It’s probably the same feeling I get in Japan actually, it’s the feeling of being in a foreign country and therefore you’re not…you don’t belong to the…you don’t have to deal with the social mores so much. Free from everything. It’s easier to be yourself in a foreign country. I think that’s why so many people go crackers[chuckles] when they go on holidays in those places. The freedom’s too much for them.

I was just remembering the time I had my hand on my mother’s tit in Number 1 Blomfield Road, in…off Mather Avenue, near Garston. It’s when I was about 14. I took the day off school, I was always doing that and hanging out in her house.  Oh we were lying on the bed and I was thinking, I wonder if I should doing anything else, you know. And it was a strange moment, because I actually had the hots, as they say, for some rather lower-class female that lived on the opposite side of the road. But I always think whether I should have done it, presuming she would have allowed it.

The thing I wanted to add about McCartney, Dylan, and Jagger, et. al., is that they’re all company men. In various disguises. But basically company men. And not forgetting the singing dwarf, Mr. Simon. And by the way Mother was wearing a black Angora short-sleeved round neck sweater, not too fluffy, maybe it was the other stuff–cashmere–that’s it, black cashmere, soft wool anyway, and I believe that tight, dark green-yellow mottled skirt. [Sighs] Hey-ho.  I always remember seeing her going down on Twitchy, or otherwise known as Robert Dykins, D-Y-K-I-N-S, Bobby Dykins, second husband although I don’t know if she ever married him.  She was under the bed sheets and I wondered into the room, `cause I was staying there, same period, 14 on, 13 on, whatever. And I can’t remember exactly what I felt…shock, I know that. `Cause I was already in to it myself..I probably wasn’t that shocked. It was the idea of going down on him, I think, sleazy little waiter, with a nervous cough and the thinning, margarine-coated hair. He used to always push his hand in the margarine or butter, usually margarine, and grease his hair with it before he left.  He used to keep his tips in a big tin on top of a cupboard in the kitchen and I used to always steal them.  [wistful] And I believe Mother got the blame.

That’s the least they can do for me. I’m sitting here waiting to be taken out to view yet another group of houses for our country retreat…this endless search for Scotland outside of New York [chuckles] within an hour of New York. Well now I’ve given up Scotland and the ocean and I’m settling for some grass and a tree.  I read somewhere..some guy saying about the sexual fantasies and urges that he had all his life when he was twenty and then when he was thirty he thought they’d cool down and then when he got into his forties he thought they’d cool down [but] they didn’t and went on to his 60’s and 70’s and he was still driveling on in his mind, when he couldn’t possibly do anything about it. So that rather…well  not depressed but I thought shit, because I was always waiting for them to lessen, but I suppose it’s going to go  on forever. Forever is a bit too strong a word, but say it’ll go on until you leave this body anyway…let’s hope, the game is to conquer it as they say, before you leave otherwise you come back for more, and who wants to come back just to come? Or maybe I read it in the Capote thing…I’ll check it.

Well, well, here we are. Aged thirty-nine, looking out of my hotel window, wondering whether to jump out or get back in bed. So, I got back in bed.