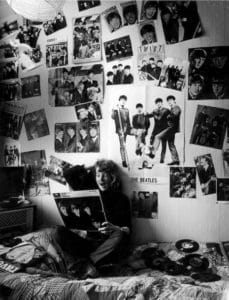 “I was curious on your take on lists? Specifically, Top 100 Beatles songs? The Beatles Channel has been playing a special this weekend, where listeners voted for their top 100 songs — here are the top 5:

In general, I’m not much for lists — they give undue weight to what can only be stochastic opinion. I for sure don’t think lists represent the best or greatest of anything. And (if I might be so bold), one of the points of Dullblog ‘way back when was to begin applying a different kind of thinking to the topic, something a bit more interesting than the Rolling Stone Top X of All Time.

What they are best at is representing a level of sentimental attachment among the (I say this lovingly) lumpen fandom. In the 70s, “Hey Jude” was perennially at the top of K-SHE’s “Beatles Weekend” or whatever they called it back then. The idea that a song as bizarre and un-pop as “A Day in the Life” would be #1, or “In My Life” (dig that rockin’ fake harpsichord, Madame) would be #2 was incomprehensible. Both were considered fine entries in the Beatles’ catalog, but they weren’t anything near their best songs. “Hey Jude,” “I Want to Hold Your Hand,” “Help!” — these were the biggies. In the UK, “She Loves You” was always on the list, because that was when the Beatles first grabbed and squeezed the British heart.

It was only after Lennon’s murder that both “Life” songs rocketed to the top… for a lot of reasons, none of them having to do with the music. “In My Life” suddenly reached heights of irony and depths of melancholy; and since Lennon was the martyred genius of the group, his magnum opus had to be the group’s best song, right?

As the years have passed, we have not missed Lennon less (can you imagine what he’d say about Trump?), McCartney continues to commit the unforgivable (in pop culture) sin of living happily ever after, and the average age of Beatles fans has grown steady older; and so the revised lists remain much as they were in 1981. (George does better, now that he’s dead, too.) Of course Rolling Stone ranked “A Day In The Life” the Beatles’ best. Not to be outdone, MOJO Magazine, which I genuinely like, lost its freakin’ mind and named “In My Life” the best song of all time in 2000.

All that having been said, I think lists are harmless fun — a phrase I seem to be using a lot lately. So here are mine, as of this moment:

And yours? Put ’em in the comments.

The Beatles on Spotify