Commenter @Hologram Sam posted this interview in a comment thread a couple of days ago, but after reading it, I thought it was interesting enough to surface on the front page. There’s actually some freshness to the intro (who called Paul “the most Beatley Beatle of them all” and can I shake his/her hand?). This bit I found both fluid and fascinating because, well, what Beatlefan hasn’t wondered what in blazes do they do all day?:

“His touring routine is well established: breakfast, a workout, perhaps a massage, then meetings with his team. If the weather’s clement and security conditions are favourable, a bike ride around the locality of the hotel. If there’s water nearby, he might try to get out on it in a boat. [!!-MG] Today, he will rehearse with the band, then have a quiet early dinner with Nancy and a few friends from the touring party. Tomorrow’s soundcheck will be any time between 3pm and 4:30pm. Then, as show time approaches, he will retreat to his dressing room to watch trashy American TV. After the concert, a drink, dinner, bed. And up early to travel to Tokyo for the next show.”

And this string of words seemed, if you’ll forgive me, almost Dullbloggian:

“McCartney, I think, rather than an embarrassing uncle, is a sort of dad figure to pop culture, someone whose influence we can’t help but acknowledge, someone we admire – love, even, without always wanting to admit it – but also someone to criticise; someone whose minor faults are exaggerated and whose abundant qualities are diminished or overlooked.”

McCartney himself was on his game, too. For example, he compares the pleasure of singing his back catalog to “drowning. In the nicest possible way.” 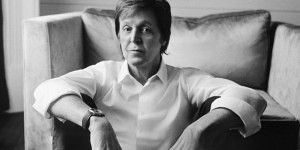 On why he hasn’t retired: “I mean, I never really felt like, “Oh, I did good.” Nobody does. Even at the height of The Beatles. I prefer to think there’s something I’m not doing quite right, so I’m constantly working on it. I always was, we always were. I mean, look at John [Lennon], a mass of paranoia and worries about whether he’s doing it right. You only have to listen to his lyrics. I think that’s just artists in general.”

To which interviewer Alex Bilmes says, “They say happiness writes white.” Thunk, into the center.

ESQ: Many of your songs are autobiographical. One of the reasons they resonate is people know what they’re about: ‘Let it Be’, about your mum; ‘Maybe I’m Amazed’, about Linda. Are you thinking about those people when you play those songs? Isn’t it painful?

PM: No, not always. I’m really doing them just because they’re songs. I mean, when I do ‘Let it Be’ I’m not thinking about my mum. If there’s one thing I know it’s that everyone in that audience is thinking something different. And that’s 50,000 different thoughts, depending on the capacity of the hall. Obviously, when I do ‘Here Today’ as I do, that is very personal. That is me talking to John. But as you sing them you review them. So I go, [sings] “What about the night we cried?” And I’m thinking, “Oh, yeah: Key West”. We were all drunk. We’d delayed Jacksonville because of a hurricane. We got parked in Key West and we stayed up all night and we got drunk – “Let me tell you, man, you’re fucking great” – so I know that’s what I’m talking about. I know the night. I do think of that.

And this bit, made by McCartney’s details, which are especially amazing given how many times he’s been asked a version of this question. You know, this Paul McCartney guy? He’s simply much smarter than your average celebrity.

ESQ: Was fame all it was cracked up to be, when you found it?

PM: It sort of was really, yeah. Because part of what it’s cracked up to be is difficult as well as great. They’d warned that. I remember making a very conscious choice: “OK, we’re getting really famous now, you’ve got to decide, whether or not to go for it.” For some reason Marilyn Monroe came into my mind. Like: this could be horrible. It was actually after a trip to Greece. We weren’t famous in Greece, and I’d hung out with the hotel band and was chatting to them: “I’m in a band, too, you know? We’re called The Beatles.” And I got a glazed look from them. I thought, “This is OK, if the fame gets too much we can always come to Greece.” Then, of course, the next year it was like, “Oh, no, you’re famous in Greece, too. Oh, God.” And I remember thinking, “Do you want to do this or don’t you?” And it was, “I like it too much to stop.”

“I like it too much to stop.” Can you imagine the famously Honest Beatles, John and George, saying something so honest? Because of course they, too, liked it too much to stop. Even when John “stopped,” from 1975-80, he wasn’t really stopping. Stopping isn’t becoming the most famous recluse since Garbo — that’s just another kind of fame.

ESQ: We’re told the Sixties created a classless society. Is that true?

PM: No. I think it helped towards that. There was a very good period of hanging with anyone: musicians, painters, aristocrats, playwrights. Didn’t matter, really. I liked that about it. But I think ultimately the nobs still stayed on top. As long as Eton and Harrow are still there that’ll always be so.

ESQ: Not to diminish your achievements, but The Beatles’ success came at a very specific moment. Clearly, the world was ready for it. Could a band ever have that kind of impact again or has the culture changed too much?

PM: We don’t live in that culture any more, that’s true. We came out of a very rich period. But let’s not forgot, those four boys were fucking good. It wasn’t just to do with the period. You name me another group of four chaps, or chapesses, who had what The Beatles had. Lennon’s skill, intelligence, acerbic wit, McCartney’s melody, whatever he’s got, Harrison’s spirituality, Ringo’s spirit of fun, great drumming. We all played, which is pretty hard. You don’t get a lot of that these days. The noise we made was just those four people playing. We came at the right time. We wrote some pretty good stuff, our own material. We didn’t have writers. Could that happen again? I don’t know. I wish people well but I have a feeling it couldn’t.

It’s all good, and you should go read it — British magazines are just so much fucking better than American ones — but I’ll leave you with this: “I shouldn’t say this about Her Majesty but we, as schoolboys, we said, “Look at the fuckin’ heave on her!”

Paul McCartney is truly my type of guy.