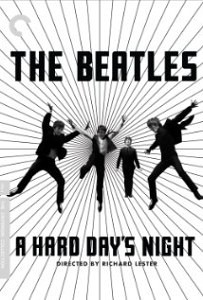 There’s something a little anime about this poster. The Beatles flying towards you, presumably screaming

One of the more dubious pleasures of our current age is the ability to meet the people who create the things you like. This streamlines the disillusionment process in ways our ancestors considered unimaginable. Imagine if John, Paul, George and Ringo could’ve met Elvis as impressionable teenagers in 1957, instead of getting famously underwhelmed that night in 1965. Why, there might have never been a Beatles…

“Mum, did you know my English teacher Skyped with Elvis?”
“I don’t know if you should believe everything Mr. McCartney tells you, Doris.”
“No, he was telling the truth this time, I saw screenshots. Mr. McCartney said he wouldn’t talk to them unless his mother was in the room. And all Elvis wanted to talk about was Mr. Lennon’s half-sister.”
“Who’s Mr. Lennon?”
“He lives in Mr McCartney’s shed. You tripped over him at the Christmas party.”
“Ah.”
“Anyway, teacher said meeting Elvis changed his life. ‘Doris, that was the day I definitely decided to go to Uni.'” 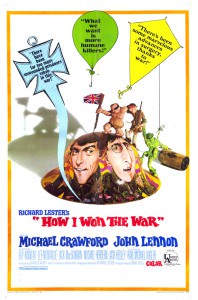 World War Two gets the “Oh! What a Lovely War” treatment, with mixed results

So, LA area readers, maybe you shouldn’t go to the Aero Theater in Santa Monica this coming Saturday, where yours truly plans to attend the annual Beatles double-bill. This year it’s A Hard Day’s Night, followed by How I Won the War, which god, I haven’t seen since probably Beatlefest in 1985. I seem to recall War being one of those Sixties movies, like The Bed-Sitting Room, where drugs were presumably handed out with your ticket. (At least I hope they were.)

Still, how often do you get to see actual moving pictures of John Lennon in all his 1966 Chief Beatle glory? And “A Hard Day’s Night” — I could watch that every week, couldn’t you? It’s so wonderful that we have a piece of film that preserves Beatlemania. If you watch that movie sympathetically, it’s impossible not to get what all the fuss was about. I’m convinced that A Hard Day’s Night — like Yellow Submarine — is one of the primary vectors through which Beatles fandom continues to spread.

If you do decide to come, let me know — if the clot of Dullbloggers is sufficiently large, I’ll contact the American Cinematheque and see if we can’t wrangle a discount. The Aero’s a lovely thing, and the crowds for their Beatles-stuff are always large and boisterous and gratifyingly diverse in age.

I hope to see some of you there!