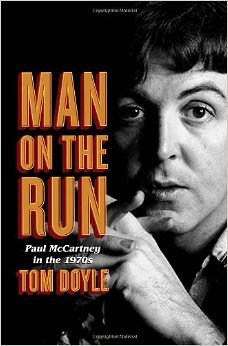 At this late date, it’s a rare book that fundamentally redefines what I think of a Beatle and his work. But after reading Tom Doyle’s Man on the Run, I’m hearing Paul McCartney’s Seventies music in a whole new way — not as tuneful, inoffensive AOR, or bargain-bin Beatles, but as a legitimate second act — a bit like Dylan after the motorcycle crash.

Doyle is just the right man for this job; a longtime contributor to the Beatles-crazy UK music mags MOJO and Q, the spine of Man on the Run was formed by a series of interviews he did with McCartney over the last several years. Doyle has an ability to tease Paul a bit, knock him off his spot, and this allows him to penetrate Paul’s persona a bit.

“When stability becomes a habit,” B.K.S. Iyengar wrote, “maturity comes and clarity follows.” Man on the Run shows McCartney painfully building a new stability out of the ruins of the Beatles, achieving a kind of own-two-feet maturity during the Wings Over America tour, then ending the Seventies with the clear knowledge that he was fundamentally more than just an ex-Beatle. You can hear this all through McCartney II, where he’s finally comfortable enough to experiment in public again.

Nancy took issue with the above, and it’s only right that she have her say: “I wouldn’t say that McCartney entered the 80s with stability, feeling he was ‘fundamentally more than just an ex-Beatle.’ Maybe, if Lennon hadn’t been murdered, that could have happened. But I think that Lennon’s death scrambled McCartney emotionally and artistically. Constantly being compared with Lennon, to his detriment, sure undercut whatever stability he’d achieved. The 80s are the period when I think he did his worst work. I see Doyle’s book as highlighting McCartney’s resilience. I’d say that McCartney isn’t consistently stable or mature , but he is consistently The Unsinkable Paul McCartney, always willing to get back up and try again.”

I can’t say I disagree with that, either. Perhaps Tom Doyle has another Macca book in him?

The author was nice enough to answer a few questions that Nancy and I lobbed his way. We’ve reprinted them below.

We loved the detail of the old ripped couch where the kittens would hide. In your conversations with Paul, what sense did you get of what enabled him and Linda to have such a durable marriage? And why was it so important to him to have Linda and the children with him on the road?

I think their durable marriage can be put down to them being determined to maintain a sense of normality, in spite of the highly unusual circumstances of their family life. There’s a great pic of them all together having dinner in a lounge area from ’76 – Linda eating from a tray on her knee, Paul playing bass, while the kids sit around them. Only on closer inspection do you realize that they’re actually on their private jet, in the middle of the Wings Over America tour. I think that says a lot. 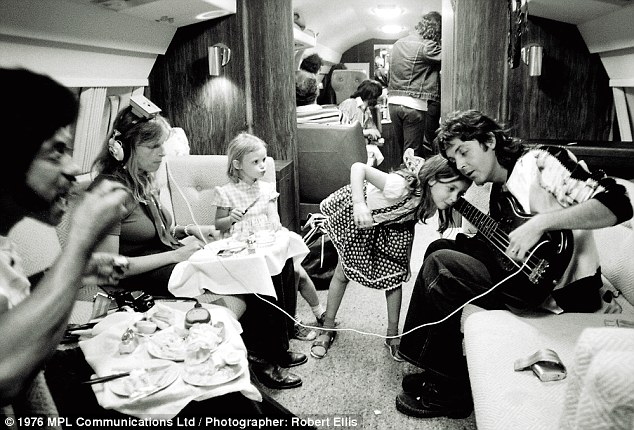 “OK Steila, that’s a ‘time-out’! Into the overhead compartment!”

It was really important for Paul to have Linda and the children on the road, to cure what you might call the loneliness of the long distance runner. Being a solo artist/band leader can be a very isolating business. The “family on the run” thing was massively important, for him maintaining stability. Having said that, Paul did admit to me that tour life sometimes wore them down, causing arguments. “It was a big love affair,” he said. “But it wasn’t perfect.”

In the introduction, you note that Paul has a tendency to hold reporters at a distance; he wants to maintain a sense of privacy — a public/personal line that he does not cross. How satisfied are you that you saw the “real” Paul McCartney? How were you able to maintain his trust, despite the feeling you got at times that you were pushing him to talk about something he didn’t want to?

I don’t think any interviewer can say, walking away from the artificial set-up of an interview, to have really seen the “real” Paul. But I think, without being immodest hopefully, that I got closer than most. I think being cheeky and Scottish and not unwilling to have a laugh with him/gently poke fun/really push him at different points, helped paint a portrait of him that is (one hopes) way beyond the usual PR spiel. If I managed to maintain his trust, it was just through being earthy and unfazed by his fame.

Even when I knew I’d pressed him on a point, I’d move on quite lightly. Despite some of the subject matter, these weren’t “heavy”, probing, combative interviews. I’m sure he’d have clammed up pretty quickly if they’d seemed that way. But I feel the chatty, lightsome approach allows you to venture into darker territory sometimes.

You mention that Paul seemed surprised when you said that his public persona might give him a screen to hide behind. Do you think that surprise came from his never having thought about it, or from being startled that you saw it or brought it up? How much do you think he consciously crafts his public persona? 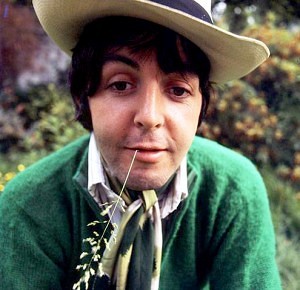 No — I think his surprise was genuine. As he states breezily in the introduction, “I’m the world’s worst analyst of me.” I believe that’s right and it’s this lack of self-analysis that keeps him sane. Trying to imagine how others see us is a pretty impossible task, and it must be unthinkably worse for a legendary figure like McCartney.

So no, I don’t think he consciously crafts his public persona, but like all of us, you try to present your best side to the world. As a result, the Macca we see isn’t the one who gets grumpy or annoyed and is generally a chipper figure.

Why do you think Paul was often treated harshly by critics, especially in the 70s and 80s? Which of his post-Beatles work do you think will last?

I think he was unfairly treated for a couple of reasons. Firstly, he was presented as supremely confident, to the point of slight smugness, in the film Let It Be. Secondly, he was then seen to have “quit” the band. So I think the critics’ knives were sharpened for his next records, and were seen as lacking when held up against the golden light of The Beatles.

Also, it was the era of heavy rock, heavy statements, and so he was seen as lightsome — which in fairness, a lot of his ‘70s stuff was. But the reissue program of his ‘70s albums is certainly painting them in a different light; I think Ram, Band On The Run and even Venus And Mars will be viewed as key albums of that decade.

Why do you think John Lennon attracts a level of devotion among fans and critics that Paul McCartney usually doesn’t? How much do you think this difference bothers him?

Well, John of course is always viewed as having been the “arty” Beatle, which obviously attracts more reverence. Then there are the horrible circumstances of his death, which almost canonized him. I’m a massive, massive Lennon fan, but it’s often forgotten how many ropey albums he made in the ‘70s (Sometime in New York City, Mind Games).

I think Lennon’s towering reputation does bother McCartney a bit, particularly when they were once level players and close friends. I think this is where certain strange moves on McCartney’s part come in, like the reversal of the credits of key Lennon/McCartney songs (for Back In The US) to highlight who had the greater contribution to the composition. Or McCartney’s forensic picking apart of the songs in Barry Miles’ Many Years From Now. But as I point out in Man on the Run, I think really this is keeping alive the competition between the two, which surely would have carried on – and been fanned – by Lennon had he lived.

Do you think the way the Beatles ended contributed to Wings’ shifting lineups? Was Paul afraid that working with genuine peers would result in recriminations and legal hassles? 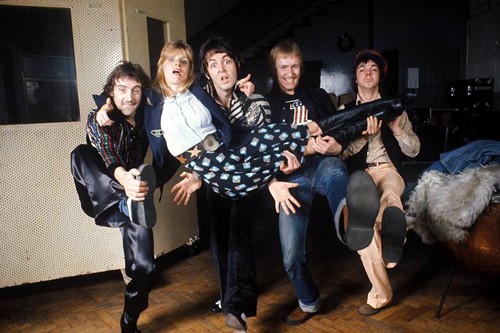 I think that’s highly likely. He was sorely burned by the experience of The Beatles court case, and obviously less than keen to commit as fully, in contractual terms, to the players in Wings. This is spotlit really by the period in ’74, when the second line-up of Wings travel to Tennessee to work up the new band and there are fallouts about contracts. The band had expected to be “signed” during this trip, but there were arguments in rehearsals, and McCartney quickly cooled on the idea of legally locking this band in. Shrewdly so, as it turned out.

Did you get to see Paul’s Japanese prison diary from 1980? Has anyone? Are there any plans to release that?

I haven’t seen it, no. I imagine what’s in [the diary] is pretty much what he’s said in interviews, including mine, about the experience. The final Wings guitarist Laurence Juber did tell me he’d read it just after Paul had written it and said it was very moving and personal.

Would you call Paul a classic British eccentric? Why do you think people are so unable/unwilling to see this part of him, in favor of the ‘control freak’/’PR man’?

Yeah, I’d say he’s pretty much a classic British eccentric. But then most musicians, even the ones who seem super straight, are gently bonkers. I think people form concrete opinions about stars, which they’re unwilling to have anyone chip away at.

After writing this book about Paul, how do you see John, George or Ringo differently?

I think I now view John – also after having interviewed Yoko three times, including once in the kitchen at the Dakota – as someone who was clearly a firework ricocheting off the walls, and a deeply sensitive man, but also very very difficult at times. George I suppose was steelier in the ‘70s than his peaceable image suggests. Ringo meanwhile was supremely laidback, it seems, in contrast to the comedy grump he has now become.

What surprised you the most? What aspects of Paul did you not expect?

This eccentric side of him. For me, this held the key to a lot of his more baffling moves such as “Mary Had A Little Lamb,” or thinking he could take half a pound of dope into Japan in 1980. This was the side to him that I wanted to write about in the book. He really did (and still does) make decisions based on complete whims, for better or for worse.

Do you think John and Paul would’ve written together in the 80s?

Has Paul commented on your book? 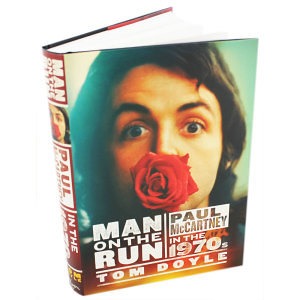 He hasn’t, but he did read the synopsis because we wanted to clear the Linda McCartney shot of him with the rose in his mouth (from the Red Rose Speedway session) for the cover of the UK edition. He allowed us to use it, so I took that as some kind of gentle endorsement.

Besides Man on the Run, what’s your own essential McCartney library?

I really enjoyed Peter Ames Carlin’s McCartney: A Life, Barry Miles’s McCartney “autobiography” Many Years From Now and a strange little paperback by George Tremlett from 1975, The Paul McCartney Story, which is long out of print but contained lots of interesting details. Having read dozens of McCartney books, I was very happy to feel I could write a worthwhile addition to the library, and hopefully I have.