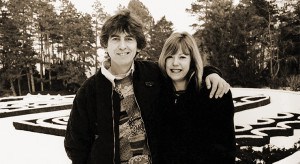 I was surfing the internet yesterday and came across an interesting story about Patti Boyd’s sister and ex-wife of Mick Fleetwood, Jenny Boyd.

After leaving her modelling career, Boyd attended UCLA and obtained her Ph.D in psychology in the late `80’s. Her Ph.D dissertation about the origins of creativity was published in 1992 as Musicians in Tune and again in 2014 as an expanded version entitled It’s Not Only Rock ’N’ Roll: Iconic Musicians Reveal The Source of Their Creativity. Here’s the description from Amazon.

Psychologist Jenny Boyd has probed the minds and souls of these artists and has delved into the drive to create, the importance of nurturing creativity, the role of unconscious influences, and the effects of chemicals and drugs on the creative process. Music legends who contributed exclusive interviews include Rosanne Cash, Eric Clapton, David Crosby, Mick Fleetwood, George Harrison, John Lee Hooker, Branford Marsalis, Stevie Nicks, Bonnie Raitt, Ravi Shankar, Ringo Starr, Ice-T, and Warren Zevon. With candid photographs and in-depth analysis of what makes great musicians tick, this will be of interest to any musician or music fan.