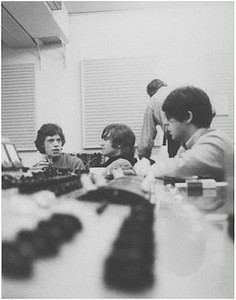 EMi studios in 1966; the Beatles, working on “Revolver,” get a visit from Mick and Keith.

NANCY CARR * That headline about Keith Richards calling Sgt. Pepper’s “rubbish” in an Esquire interview — I’ve finally seen it enough times to post about it. I’m mostly inclined to give Richards’ opinion of the album the big shrug. Some people are going to prefer the Beatles, others are going to prefer the Stones, and that’s how it’s going to remain. But here’s the relevant quote, and a few observations about it.

[Note: Scott Raab is the interviewer; one of the first things he says to Richards is “I brought a miniature joint, but I’m not thrusting it upon you. I just thought it would be wrong to meet you and not bring a little something.” Just to give you the flava.]

Esquire: “I’ve been thinking about Rubber Soul, Revolver, Sgt. Pepper, and The White Album and listening to Beggars Banquet, Let It Bleed, Sticky Fingers, and Exile on Main St. Over the past 20 years, I’ve listened to that Stones stuff far more often.”

Richards: “No, I understand–the Beatles sounded great when they were the Beatles. But there’s not a lot of roots in that music. I think they got carried away. Why not? If you’re the Beatles in the ’60’s, you just got carried away–you forget what it is you wanted to do. You’re starting to do Sgt. Pepper. Some people think it’s a genius album, but I think it’s a mishmash of rubbish, kind of like Satanic Majesties–“Oh, if you can make a load of shit, so can we.” 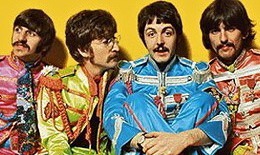 “Paul, in 48 years Keith Richards is going to call this album “a mishmash of rubbish.” “Whatever.”